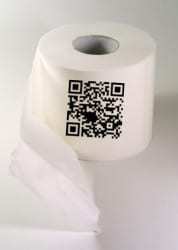 An Italian charity is using the quick response barcodes for education in public restrooms.

Sieropositivo, a charity in Italy that works to promote HIV awareness, is using QR codes printed on toilet paper in public restrooms to help to spread the word about the disease and increase the knowledge that women have about the way that it is spread.

Women who visit those lavatories can use their smartphones to scan the barcode.

The toilet paper with the QR codes is being used in women’s public washrooms in trendy clubs located in Milan and Rome. The women who actually visit those bathrooms will notice that the toilet paper rolls have a question printed upon them, as well. It asks “When you use a public restroom do you fear diseases? What about when you have sex?”

The QR codes are used to further expand on the topic and provide more information.

When scanned, the QR codes lead the user directly to the ToiletThink website. There, site visitors will be able to find out more about HIV, how it is spread, risk factors, and even myths.

The QR codes have already proven to be quite popular. This has not only suggested that the barcodes can be quite useful in this type of unique campaign, but it has also pointed out that there are a large number of people who not only bring their smartphones with them to the washroom, but that they will also use them for various purposes, as well.

The campaign is a response to the growing rate of HIV infected women in Italy. This is why the QR codes were placed specifically in women’s washrooms in order to help them to learn how to prevent infection and better understand the disease.

Though this sounds as though it is an entirely original campaign, it is not the first time that QR codes have been printed on toilet paper. It had even occurred three years ago, in July 2009, to help to encourage voters to take part in the Tokyo Metropolitan Assembly election. That toilet paper was found in the Nishitokyo City Hall restrooms.