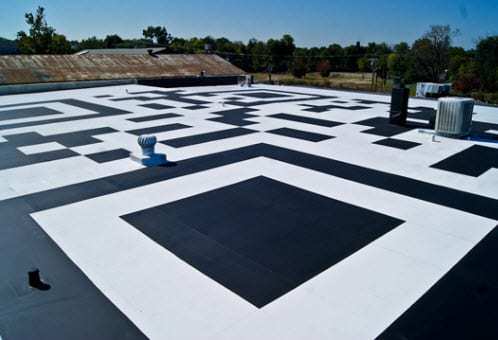 The barcodes are constantly popping up in new and unique locations and strategies.

Since the QR code has started to become very popular, it has become a considerable target for companies and individuals that have been making attempts at creating the largest one in various ways.

This was the case with Hackerspace, which created a rooftop barcode in a unique way.

Other rooftop QR code projects have occurred in the past, as have other very large ones that have been presented in stadiums, corn fields, and other surprising and sometimes unlikely locations. At the moment, the Guinness record for the largest of these barcodes is held by a Canadian farm that used one of the designs to create a corn maze.

On the other hand, the largest human QR code record was just recently set by a golf course in China.

Though the QR code is most often found in magazine and newspaper ads, as well as on product packaging and other types of print advertising, every now and again – in an increasingly common trend – the barcodes pop up in unique and interesting places.

In the case of Hackerspace Charlotte, this unique version of creating a QR code had them climbing up onto the roof of the Southern Resources metal recycling facility. They used cans of paints and hand brushes and the team worked to create a permanent 100 foot by 100 foot barcode.

This QR code can now be spotted from the Google satellite. The unfortunate problem that has been faced by this barcode, though, is that the angle that the satellite shot has presented makes it impossible to scan by the majority of mobile devices. That said, there are several photographs of it online that are just as easy to discover as the satellite image.

When scanned, the QR code directs the user to a website that simply discusses the accomplishment of crating the barcode in the first place. Though it may have seemed like a relatively simple project, it took a considerable amount of planning, and it was three weeks after the time of its completion before the satellite actually picked it up.