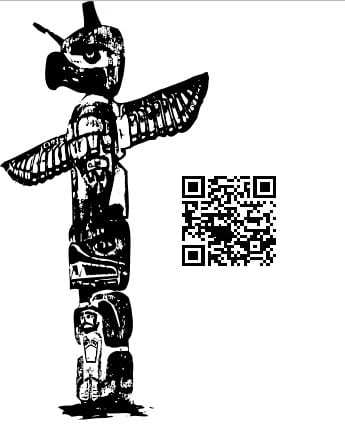 The arts project helps to offer a modern perspective on an ancient form of communication.

Totem poles have been used by native peoples of North America for thousands of years in order to represent themselves, commemorate their histories, events, ancestries, and people, and they have now been brought into the latest in communications through the inclusion of QR codes.

An interactive arts initiative of £80,000 is giving a modern technology angle to sharing memories.

Wester Hailes is using the funds in order to create a totem pole that is not only traditional in its appearance, but that also uses QR codes to connect with today’s modern people and offer more depth to the memories that it represents. The arts project received its funding from the Arts and Humanities Research Council.

The totem pole featuring the QR codes will be approximately 15 feet tall.

The work, in its entirety, will be a collective effort produced by local groups and academics as it works to generate a feeling of community in one of the city’s areas that is struggling the most. By using a series of QR codes as well as a network of trails, the totem pole provides walkers who are headed by with a way to use their smartphones to scan it for more information. They can uses these devices, as well as tablets, in order to learn more about the social history of the surrounding area.

This is an expansion on an existing effort in the region. There are already a number of plaques that provide maps, pictures, information, and certain memories along the walks. These have been assembled by local residents. The involvement in the task from the Edinburgh College of Art was Dr. Chris Speed. Dr. Speed has called the totem pole with the QR codes a piece of social architecture.

Speed also stated that “A lot of people living there have fond memories of how it used to be, especially people who grew up there. By uncovering these people’s memories, from people who are 40 to 50 now, you can use them to recover a community spirit.” He went on to say that individuals had been discussing the various activities they used to enjoy, such as fun runs they’d had in the past. He expressed that “as a result the first fun run for a long time happened this year.” The QR codes are meant to continue to share this type of community memory.