The state of Texas has dived into mobile marketing with quick response codes and its own apps.

Texas is taking its tourism to the next level – that is, the mobile marketing level – by adding a range of new resources such as QR codes in magazine ads, and apps that are designed to help visitors to be able to get the most out of their experiences in the state.

The quick response code was placed front and center in a full page ad in popular West Coast Sunset magazine.

The magazine advertisement focused specifically on the QR codes and showed an image of the barcode placed on a concert stage. It was surrounded by a graphic of a smartphone and the instructions to “use your phone to see these Texas stars”. A quick scan of the barcode using any reader app directed the smartphone user to the TravelTex website, the official tourism site for the state.

The QR codes gave access to tourism information but was clearly focused on encouraging app downloads. 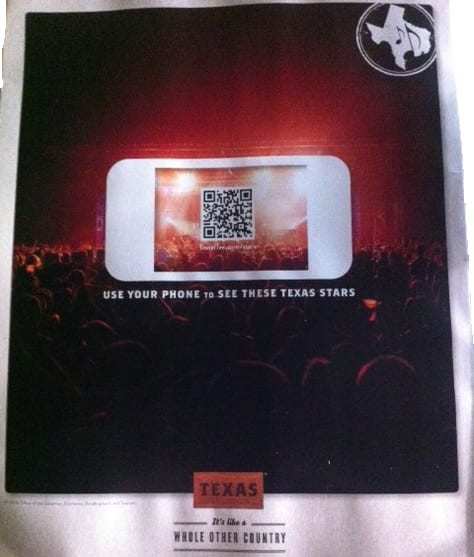 This barcode was a clear path to encourage an even deeper mobile marketing experience, through the official app. Viewing the videos and accessing other forms of content required the smartphone user to download and install the app.

The Travel Texas mobile app is available for both Android devices (version 2.3.3 and up) and for Apple devices (iOS 6.0 and later). So far, it appears to be better received among Apple device users than over Android. At the Apple App store, it has achieved a review of 4+. Reviews suggest that users appreciate the little tidbits of information but would like to see more information that is specific to various locations. On the Android platform, the mobile app has achieved 4 out of 5 stars.

Both operating systems have very limited reviews so far, but the one thread that appears to be consistent in both versions is that users are deeply disappointed that they require Facebook in order to use the application. This was the top complaint and led to the largest number of 1-star reviews for both formats, as well as the largest number of uninstalls.

It is clear that Travel Texas has managed to use QR codes extremely effectively, providing users with a clear barcode, instructions regarding how to use it, and a call to action once they arrive at the mobile website. Now only time will tell what successes develop as a result of the mobile marketing campaign as a whole.