New York City public transit users can now use Apple Pay mobile payments at all subway stations as well as in all buses as the system completed its rollout of the new One Metro New York (OMNY) feature.

The feature allows people to use their smartphones or even their Apple Watch to pay their fare.

The addition of Apple Pay mobile payments and other digital transactions provide riders with more ways to ensure they can quickly and easily pay their fare and get to where they’re going. The last thing they want to have to do is line up at a kiosk and reload their card when they have a train to catch. Unfortunately, this is all too frequently the situation when they face an “Insufficient Fare” turnstile message.

The new transaction service is worked into the entire OMNY system, which has been rolled out in every subway station as well as on all buses. This includes locations across all five boroughs. In total, there are 15,000 OMNY readers at the city’s 472 different stations and on the 5,800 traveling its streets.

The digital and Apple Pay mobile payments were the latest addition to the MTA’s features.

The MTA introduced the ONMY payment system to help to gradually replace all the MetroCards currently in use. The goal is to eliminate the plastic cards by 2023. Some of the city’s stations have been testing Apple Pay since as far back as 2019, but it is only very recently that it has become available at all stations and on all buses.

The OMNY system works using NFC technology, so that it is compatible with many smartphones, as well as enabled devices like smartwatches, or simply contactless cards with the right tap chip. Users can pay for individual fares with this service. That said, there isn’t yet any way to use it to purchase a weekly or monthly unlimited pass. 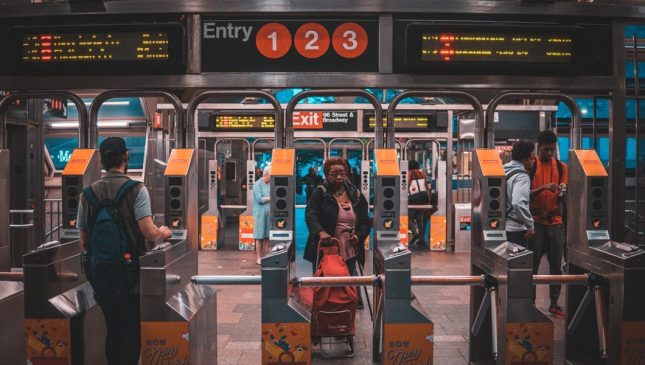 The MTA has confirmed that it will be opening up additional fare options through OMNY and Apple Pay mobile payments later in 2021 and beyond.