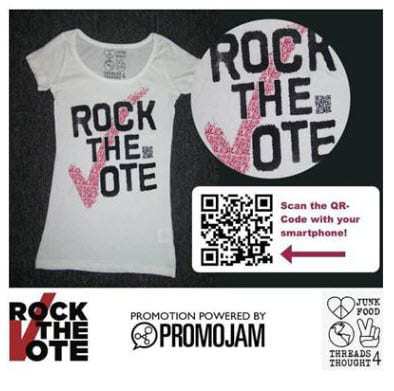 As presidential campaigns begin to pick up steam in the U.S., QR codes are likely to play a significant role in getting young, tech-savvy people to vote. Popular non-profit group Rock the Vote has teamed with clothing brands Junk Food and Threads for Thought to launch a new QR campaigned aimed at bolstering the political power of young generations. Rock the Vote has created a series of QR codes that will be branded on shirts from both clothing companies. The group believes that these codes are popular amongst young people, largely because smart phones and mobile technology is popular with this demographic.

When the codes are scanned with a smart phone, people will be directed to a mobile website where they can find educational videos regarding the election. From this site, young voters will be encouraged to take social action by going to Rock the Vote’s Facebook page. They will also be able to register to vote online using their smart phones, a relatively new tactic that may be successful with a generation that is more willing to respond to electronic stimulus.

The QR coded shirts were first introduced at this year’s SXSW event in Austin, Texas, but will be available throughout the election year. Rock the Vote does not support any specific candidate or political party. The group’s goal is to promote awareness of social issues and embolden young people to take a stand for their political beliefs.