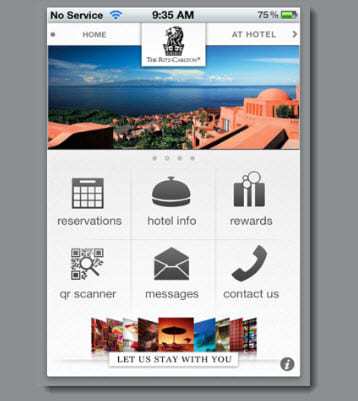 The luxury hotel has announced the release of its first smartphone application, which seamlessly integrates with its other social platforms.

The Ritz-Carlton hotel has finally announced the launch of its mobile app, an event that has been long expected and awaited, though the luxury hotel still says that it will pleasantly surprise smartphone users.

This is because the Ritz-Carlton mobile app was not designed for a mere basic mobile presence. Instead, it provides users with a feature-rich experience that easily integrates with other social platforms for the brand, such as Foursquare.

The new mobile app was created to provide the user with a truly distinctive experience even before they step onto the hotel property. Among its most notable elements is the Presidential Tips function, in which Herve Humler, the president of the company, shares his top tips about many of the hotel’s locations around the world, highlighting elements that are exquisite and unique, from gardens to chandeliers.

These tips are available to app users simply by scanning QR codes located at the desk when they check in.

Humler, who is also the COO of the organization, explained that “In my role, I am fortunate to be able to visit all of our stunning locations around the world.” He stated that his goal is to provide an enriched experience for the guests of the hotels, by offering additional information about the elements of the locations that he has found specifically memorable and special during his own stays there.

Smartphone owners will already have VIP insider information even before they arrive at their destinations.

The Ritz-Carlton App is available for both Android smartphones and Apple iPhones. Along with its release, the hotel chain also debuted its QR code on-property experience tours at 20 of its locations. They include a wine pairing tour in Hong Kong’s Highest Hotel in the world, as well as a cultural art tour at the Kapalua location. In Berlin, it consists of a digital scavenger hunt, while the Battery Park location in New York provides the recipe for the its 10-year anniversary cocktail.