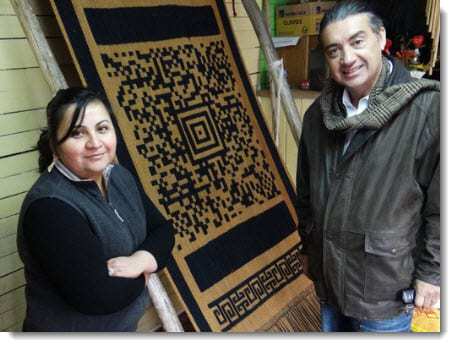 These little barcodes are now being used to help preserve cultural identity.

Chilean artist based in Los Angeles, Guillermo Bert, is using quick response codes to help to preserve the traditions and cultural identity of the largest population of indigenous people in Chile, the Mapuche.

Used widely by mobile marketers, Bert sees cultural and political potential in them, as well.

For this reason, Bert has worked the quick response codes into his artistic work over the last half decade. He believes that if an individual can scan a piece of art using his or her smartphone and learn more about the culture behind the work, then it will help to share this information much more openly and broadly.

Quick response codes will also help to avoid degeneration of the culture through digitized identities.

Bert believes that when an identity is digitized, the result can be the thinning of the culture, or the theft of its traditions. However, in the case of the traditional textiles created by the Mapuche, which include intricate geometric patterns, the foundation was already there. Bert saw a notable resemblance between those patterns and the appearance of quick response codes.

The result was what Bert calls “Encoded Textiles”, which feature quick response codes.

The hope is that this art form will help to give some weight to the battle the Mapuche have been fighting for centuries in order to protect their distinct culture. They are currently the only native population in the American continents to have defended their land for over 300 years against the Spanish crown’s incursions. They have also signed agreements to help to secure and protect their autonomy.

However, when Chile became an independent nation, the Mapuche faced a new war with the country, the outcome of which was cultural assimilation, oppression, and colonization. More recently, through a wide variety of efforts, the Mapuche are beginning to reassert themselves as a distinct culture with political rights within today’s society in Chile.

Through techniques such as the incorporation of quick response codes into textiles, they are working to preserve their language and stories, which are currently threatened and gradually disappearing.