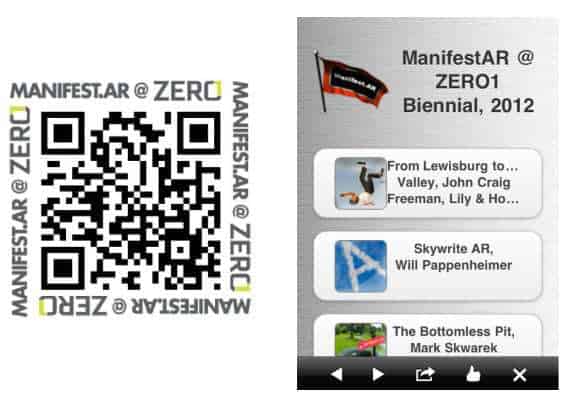 The 2012 ZERO1 Biennial event is currently underway in San Francisco, California, which has turned the entire city into a public art exhibition that cannot be seen with the naked eye. ZERO1 is a non-profit art organization that aims to combine artistic vision with technology and show off the result during its biennial event. This year, ZERO1 has tapped ManifestAR to show off how augmented reality can be used to produce works of art. The organization’s work can be seen throughout the city using a mobile device.

ManifestAR is an international artist coalition that works with various forms of augmented reality technology. Through the use of the technology, those part of the coalition create public art that can only be seen through the use of a smart phone or similar mobile device. Typically, ManifestAR uses markers, such as QR codes, to denote where these high-tech exhibitions can be experienced. Through its work with augmented reality, ManifestAR aims to present a new perspective on public space and how it can be used as a medium of presentation.

The ZERO1 Biennial even will run through December 8, 2012, and will showcase a wide range of digital artwork, which can be seen throughout San Francisco. This is not the first augmented reality art event that ManifestAR has been a part of. Augmented reality is becoming increasingly common in the art world because of its aptitude to create innovative experiences that are not often experienced by the average consumer.