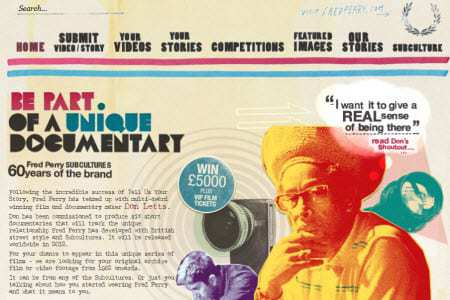 The campaign is meant to promote a competition that was born from the partnership of Fred Perry and filmmaker Don Letts. The competition aims to detail the impact Fred Perry has had on the various UK subcultures since the 1950’s. Those with film footage of this time period are encouraged to submit what they have via the competition’s website, which can be accessed by scanned the QR code associated with the promotional campaign.

QR codes have been very popular in the advertisement businesses lately. The codes have allowed businesses to connect with consumers in a dynamic way and provide them with access to digital content or more information regarding a particular product, service or company. The codes are often used as promotional tools as well – such is the case with the latest Fred Perry campaign. The retailer believes that the codes will be popular amongst the tech-savvy crowd, but how the codes will fare with people that have actual film footage of the 1950’s is unknown.

Thus far, the Fred Perry QR codes have garnered approximately 1,300 scans throughout the UK, France, Germany, the U.S., and Italy. Most of these scans have come from Facebook – 49% — with direct scans of the codes accounting for just 20% of all interaction. Some smart phone users have reported a problem with the codes, claiming that they direct to a website that is not optimized for mobile viewing. This could be a significant problem for Fred Perry, as consumers have abandoned codes that lead to non-mobilized websites in the past.

Filmmaker Don Letts will compile the footage submitted through the course of the competition and create a documentary. The film is currently under development and is expected to be unveiled at future film festivals in Europe. Those participating in the competitions by submitting video footage will have a chance to win more than $6,000 and tickets to see the debut of the documentary. Other prizes, such as limited edition Fred Perry shirts, will be available as well.