As smartphones gain larger screens and tablets have smaller ones, these e-book reading devices are fading in popularity.

According to new data that has been released by Pew Research, the ownership of e-reader mobile devices has reached an all-time low, having cut itself nearly in half when compared to data collected in previous years.

Pew’s report on the data showed that this year, only 19 percent of adults currently own a dedicated e-reading device.

This is a striking drop from the figure from 2014, at which time 32 percent of adults owned an e-reader gadget such as a Kindle, Kobo or Nook. This drop in dedicated e-ink based electronic book readers has been blamed on the considerably larger penetration of smartphones and tablets, particularly with screen sizes that are comparable to those of the mobile devices dedicated to e-reading. Pew Research Center now claims that 68 percent of adults are now smartphone owners, which is double the penetration rate from 2011, which was the first year in which the firm started measuring smartphone ownership.

In 2011, 35 percent of adults owned smartphones, which opened up a much larger world to the e-reader. 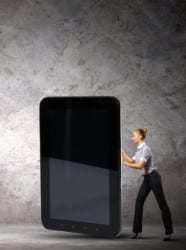 Since the majority of people didn’t already have a mobile device on hand wherever they went, it didn’t feel as though they were buying an extra gadget when it came to e-readers. Pew also determined that at the moment, 45 percent of American adults own tablets . That represents a sizeable growth since 2010, the first year that the firm measured the ownership of those mobile devices. In that first year, only 4 percent of U.S. adults owned tablets. That said, according to Pew, tablet ownership last year and this year have remained statistically the same.

The data from the report from Pew Research makes it very clear that the expanded ownership of smartphones and tablets has greatly cut into the market share that had once belonged to the dedicated e-reader. Equally, when it comes to actually reading e-books, between smartphones and tablets, it is the smaller screen that is the most popular among consumers. Just because the dedicated devices are not as popular as they once were, it doesn’t mean that consumers aren’t continuing to download their bestsellers, YA fiction and beloved titles in e-book format.