The tech giant has partnered with Novartis, a Swiss drugmaker, to create these new smart devices.

Google has now entered into a partnership with Novartis in order to develop wearables in the form of contact lenses that would be able to assist individuals with diabetes in being able to track their blood glucose levels while helping to restore the ability of the eye to focus.

The wearable technology would measure the glucose levels in tear fluid and wirelessly transmit that data to a smartphone.

Novaris explained that these wearables would be able to read the levels of glucose present within the tears in the eye. It would register that data and then send it wirelessly to a smartphone, tablet, or other mobile device. This wearable tech could prove to be potentially life changing for many people with diabetes, who are traditionally required to have to prick their fingers up to 10 times each day in order to read their blood glucose levels.

Should Google and Novartis be successful with these wearables, it could revolutionize the blood sugar tracking market. 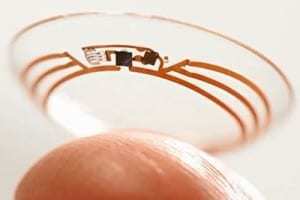 Considering the rapidly growing number of people who have diabetes and who will be affected by this type of technology news, this goal is an exceptionally important one. In fact, the GlobalData research firm has predicted that by 2017, the market for blood sugar tracking, worldwide, will be worth an estimated $12 billion. At the moment, there are approximately 382 million people around the world who have diabetes.

That said, these contacts will also have a second feature, which will be to assist the eye in focusing when presbyopia is present. That is a condition that causes the eye to struggle to focus on objects that are close up, and that is commonly associated with aging. The hope from Novartis is that this new lens wearable technology will help to bring back the eye’s ability to focus in, using a concept that is similar to autofocus features on cameras.

These wearables will be created with embedded microchips, non-invasive sensors, and other forms of miniature electronics and will be developed by the Alcon eyecare unit from Novartis through the Google deal.