From Google Glass to shoes made in a 3D printer, it looks as though tech based apparel is coming our way.

However, New York City was among the first to see this category transformed into something fashionable.

If there’s one thing that could be said about wearable technology of virtually all kinds, until now, it’s that it wasn’t very attractive. As fun and functional as augmented reality glasses and smartwatches may be, they didn’t have much to offer in the style department. However, many designers have seen beyond the practicality and have noticed that the capabilities of these products have opened up a whole new world of high fashion. This is just what NYC recently saw.

The Wearable Technology Fashion Show saw tech of all forms sewn into imaginative types of apparel. 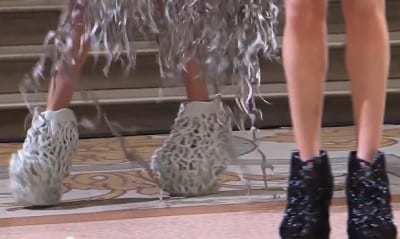 The entire event was organized by Tech in Motion and it brought together a number of local tech communities from around the country. Fashion beyond what had previously been imagined stomped its way down the runway in the form of 3D printed pieces, style changed Google Glass, LED lit clothing, all that were frequently in attention grabbing and brightly colored designs.

This marriage of tech and fashionable apparel defined an entirely new level of style, as well as a glimpse into the types of possibilities that are opening up for the future that isn’t that far away. It could provide us with a hint of what the next few years with bring, and they won’t have anything to do with the silver jumpsuits of bad sci-fi movies.

Creative and fashion forward minds at design labels such as ContinuumFashion, TheLaserGirls, Sensoree, and a collaboration between MakerBot and Asher Levine brought wearable technology to the spotlight, unlike anything that has ever been seen. The next question is whether or not this type of tech based clothing, jewelry, footwear, and accessories will be making their way into the mainstream and when it will be spotted walking down the street.