New semi robotic suits have the ability to provide workers with far greater strength than they naturally have.

Beginning in 2013, Daewoo Shipbuilding and Engineering ran tests of wearable tech in the form of robotic suits that would provide its workers with far greater strength than their natural capabilities, so that they would be able to lift heavy objects at one of its facilities.

Without the robot suits, these items would be far too heavy for the employees at the Okpo-dong, South Korea site.

A report about the wearable tech has now been released in New Scientist. In it, the report showed that the tests on the robot suits appeared to be successful. The workers were able to much more easily lift and carry objects that were over 65 pounds. The report also indicated that the goal is to improve the technology so that the workers will be able to lift more than 220 pounds with as much ease.

The wearable tech suits aren’t light, but they are designed to anticipate and respond to the movements of the wearer. 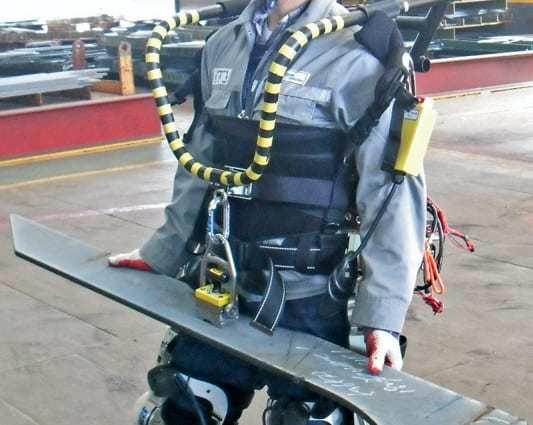 The technology suits weigh approximately 62 pounds. However, the design of these wearable devices makes it so that they will anticipate to the physical movements of the wearer and respond appropriately. The idea is that the worker will be able to maneuver around quite comfortably without feeling as though they are hauling a giant robot armor around, everywhere they go.

At the moment, the robot suit’s prototype is capable of functioning for three full hours on its battery, which is quite an accomplishment. Should every worker who must manage heavy materials improve their efficiency for three full hours, it could generate a great deal more time for those employees to be able to complete a range of other tasks, while their suits are charging. The wearables are also equipped with a number of different tools to allow the workers to be able to manipulate and lift objects that would otherwise be too heavy.

Even within the limited prototype phase of this wearable tech, the robot suit from Daewoo is already proving to be one of the applications for wearables that comes with the greatest potential.