Among all of the frustrations that drivers face on the road, seeing other motorists with handsets tops the list.

As much as not signaling a lane change and hogging lanes can cause a driver’s blood to boil, those two frustrations have dropped on the list among U.K. road users, and taking the first place has been the use of mobile phones while behind the wheel.

Nearly one in every three U.K. drivers feels that seeing other drivers using a cell phone while driving angers them most.

At the same time that almost a third of all drivers feel that it is the most irritating thing that they see on the road, a tremendous 10 percent of all drivers – 1 in every 10 – admits to having driven with mobile phones. This, according to the results of a survey conducted by Auto Express that the firm recently released. The research involved the participation of 10,000 people who were asked about the types of driving habits that they disliked the most, as well as about those of which they are actually guilty.

Among all of the frustrating traits of drivers, it was mobile phone usage that was most annoying. 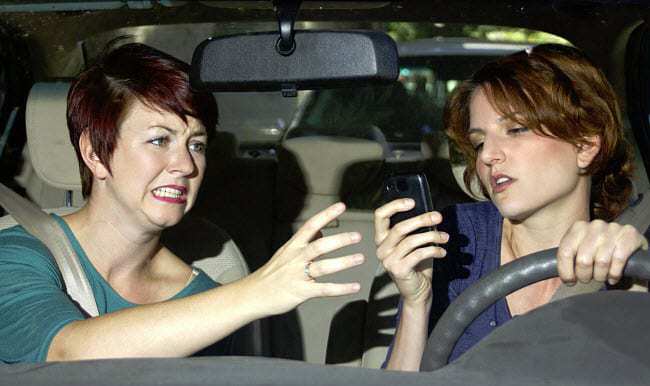 Among the participants in the survey, 29 percent said that they felt that the use of smartphones by other drivers aggravated them the most. In second place was the failure to signal lane changes on roundabouts, followed by lane hogging. Each of those last two left around 25 percent of drivers feeling the most enraged.

The Institute of Advanced Motorists (IAM) director of policy and research, Neil Greig, explained to Auto Express that “Holding a mobile phone has a direct and obvious impact on driving, such as swerving across lanes, slowing down and a having a lack of concentration, so I can see why it upsets so many.”

When the drivers who participated in this survey actually confessed about the various frustrating habits of which they were guilty, the largest percentage said that speeding on a regular basis. Among them, 65 percent said that this was one of their regular habits. That said, only 4 percent of the participants said that seeing other drivers exceeding the speed limit actually bothered them. Clearly, that was well behind the frustration that they felt for mobile phone users.