A new report from uSwitch, a leading UK comparison and switching service, reveals that UK mobile commerce and tablet commerce is expected to break records this year. In 2019, it has been forecasted that £25 billion ($32.9 billion) will be spent by British mobile shoppers, which is £10 billion (over $13.1 billion) more compared to the country’s m-commerce figures in 2018.

Thirty million Brits are expected to use their phones to shop this year.

If uSwitch’s projections are correct, this would be a 66% year-on-year increase. It also means that more people will use their mobile devices (smartphones and tablets) to make purchases in 2019 compared to making purchases in-store or via their desktop or laptop computers.

According to uSwitch, the rise in UK mobile commerce has to do with convenience and saving them money. Two thirds of British mobile shoppers surveyed say the choose to shop via their mobile device because they can shop at any time in any location. Meanwhile, a third also believe that smartphone shopping saves them money as it allows them to easily compare prices among different retailers.

In terms of the most popular location from which Brits like to engage in mobile shopping, the living room was the top spot, with 78% of those surveyed saying they like to shop and buy from the comfort of their couch. Interestingly, while 14% say they shop at work, the survey found that younger people tend to shop the most from the bathroom compared to the kitchen.

Online retailer giant Amazon continues to be the most popular service for mobile shopping among Brits, with 89% using Amazon in 2018 to make mobile purchases. eBay ranked second
with 63% and Argos came in third with 41%.

“With smartphone and tablet shopping now a £25 billion industry, it’s hardly surprising that major retailers have long adopted a mobile-first approach to their websites and have even introduced their own apps to make the user experience as easy as possible,” said Ru Bhikha, mobiles expert at uSwitch, 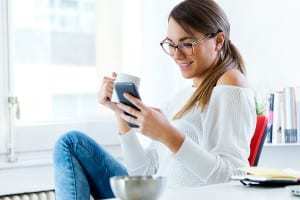 Ru Bhikha believes that UK mobile commerce and tablet commerce will only increase with “Cleaner user journeys and the ease of one-click purchasing.”