By most accounts, more people will access the web via mobile device than a computer by the end of 2014. But what most reports don’t tell you (at least not yet) is that more people are getting TV shows and movies from mobile devices, as well. Even companies like Direct TV are getting into the mobile act!

New programming is what. Hulu added two shows to its growing list of originals. “Quick Draw,” a comedic Western set in 1875. And “East Los High” is an inner-city soap set in East Los Angeles with an all-Hispanic cast, centering around two teenage cousins. There’s no release date that has been confirmed.

Amazon’s streaming service is available for just about every device except Apple TV — not just Kindle Fire and Amazon’s other projects. And instead of having to wait months to view new episodes of television shows licensed with Netflix, Amazon’s licensed shows are available the day after they air.

Netflix Gets Bigger in Your Home

The initial hype about the Netflix original series “House of Cards” has died down, but the buzz is still in the air due to the shows high ratings. Like Amazon’s streaming service, Netflix offers mobile apps for just about every kind of mobile device.

One device it has the exclusive on is Apple TV. Apple TV, for example, doesn’t have an app for Amazon’s video service — at least not at the moment.

Another useful service, Netflix launched a new $12 a month family plan that will allow users to stream up to four devices at a time, as opposed to the current two-device streaming. This will make it perfect for larger families, as well as families whose members simply want to watch several programs at a time. 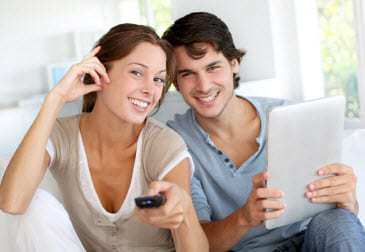 Another advantage Netflix is giving users is the ability to have personalized profiles that will allow family members to maintain separate queues and get more personal recommendations. That way, each member of a household can see selections appropriate to their own viewing habits, instead of creating one lopsided or muddied account for the whole household.

HBO estimates that its users are increasing — but it’s hard to tell how many. That’s because many of them are unpaid users!

It turns out that people have been sharing their HBO account online for years. According to a New York Times article on HBO mobile, the problem is rampant among younger HBO fans — fans who would normally be expected to become paid subscribers. But HBO at the moment claims that the practice isn’t a significant problem.

What’s going on with HBO? Do they have a secret plan in mind to hook users now and bill them later? Maybe they plan to start serving up advertisements in the near future? Maybe they’re just afraid of the same kind of backlash the music industry has the face over various RIAA actions?

No one knows for sure, and HBO isn’t giving away any clues. But at least for now, the network doesn’t seem ready to crack down if you share a friends account.

Cable TV powerhouse DirecTV is launching new features to extend their reach into mobile devices, as well. Direct TV allows you to take your home system with you (in a portable version) using their mobile apps for tablets and phones.