Starbucks is quickly becoming the shining example of what can be accomplished through a focus on mobile commerce. The company has been growing more mobile-centric recently in order to engage a changing generation of consumers that have begun to rely more on their mobile devices in order to shop for and purchase products. In the retail space, smartphone users are finding that mobile commerce services have provided them with a more convenient way to shop, and Starbucks is looking to take advantage of this convenience.

In 2013, Starbucks reported that 10% of its 2013 revenue came from transactions through its popular mobile application. The application must be attached to a Starbucks loyalty card, which generally would be a detractor for consumers, but many people have favored this attachment as it provides them with special rewards for relatively little effort. Now, however, 18% of all transactions being made in Starbucks stores are now being made over mobile devices. Mobile commerce is likely to play a larger role for Starbucks as it continues to expand payment support throughout its stores. 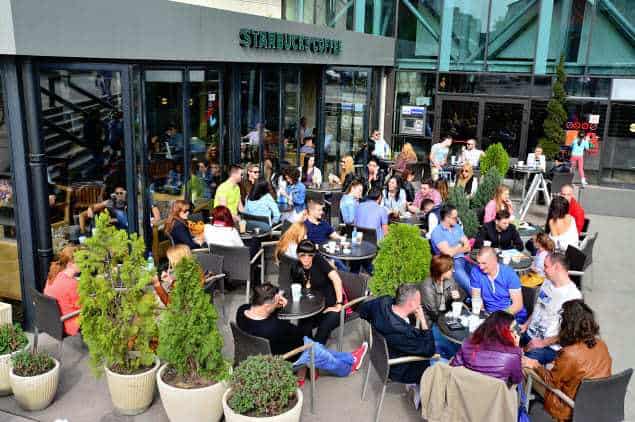 Starbucks may be able to serve as a powerful example as to how companies can find success through embracing mobile commerce. In a relatively short time, Starbucks has shown that focusing on mobile consumers can have lucrative benefits. A growing number of the company’s interaction with consumers, whether they are purchasing products or simply engaging on social media, is coming from those using mobile devices. As Starbucks engages mobile consumers more aggressively, it is finding that these consumers are contributing more to the company’s revenue.

Some retailers find it difficult to engage mobile consumers

A mobile-centric approach may not be ideal for many retailers. In the retail space, shopping in physical stores still remains the preferred way for consumers to shop for products. Some retailers have found it difficult to provide consumers with an enjoyable mobile shopping experience, which has led to consumers being somewhat wary of the mobile commerce solutions coming from retailers.