This effort has allowed the issue to be brought to the attention of millions of people around the globe.

Although the traditional strategy for drawing the public eye to a devastating issue on the other side of the globe is to hold awareness events and post emotional pictures, the social media marketing campaign involving the #BringBackOurGirls hashtag has shown, once more, that Facebook, Twitter, Google+ and other networks can also be exceptionally powerful performers.

Last month, over 200 Nigerian schoolgirls were kidnapped, and now the world is watching.

Armed militants took the children from their boarding school in Nigeria. While this type of horrific event may have gone virtually unnoticed by the Western world, it has now gained the level of international importance that many feel that it deserves, through efforts as straightforward as the #BringBackOurGirls social media marketing campaign. There is now a $300,000 cash reward being offered to any person who can provide information that could assist in the location and rescue of these children.

Though this may look like an organized social media marketing campaign, now, it didn’t start that way! 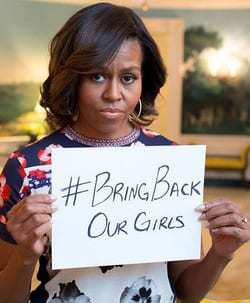 What is now a massive global response to a devastating circumstance, the awareness and activism campaign was not the result of a carefully choreographed and strategic effort. Instead, it is the response that that world has had to a sprinkling of Nigerian citizens who looked to Twitter to express their outrage about what was going on in their country.

At first, these posts received very little notice, despite the fact that they were making a powerful message about this horrible kidnapping of young girls. That said, despite the fact that the notice was small, it managed to reach the right people. The World Bank for Africa vice president, Oby Ezekwesili, spoke in Nigeria, demanding that the country’s government assist in the effort to ‘bring back our girls”.

Nigerian tweeters heard this outcry and used the #BringBackOurGirls hashtag, that managed to grow at an explosive rate. It has now been used in more than one million tweets around the world. This doesn’t include its use on social media marketing campaigns over other major networks. Now, hundreds of thousands – including first lady Michelle Obama – are posting their own images that feature the hashtag, in the hopes of reaching even more people, and connecting with the right individual who knows how to bring these children safely home.