Those who want to see Vermeer’s famous paintings don’t have to travel the world to do it.

The Mauritshuis museum has teamed up with Google Arts & Culture in Paris to develop a Vermeer augmented reality app. The AR app creates a virtual museum that features all the artists’ works, including what is arguably his best (and most well-known masterpiece), “Girl With a Pearl Earring,” which is on display at the Maurithuis.

Museums from around the world have contributed images of the Dutch artist’s famed work.

Only 36 paintings are broadly acknowledged as his work and the originals of these can be found in private collections and museums across the globe, including The Hague, Paris, London, New York and beyond.

The original paintings of the artist’s work included in the Vermeer augmented reality app have come from the Metropolitan Museum of Art, the National Gallery of Art, the Rijksmuseum, the Louvre, and the Frick Collection. Even Boston’s Isabella Stewart Gardner Museum has shared an image of “The Concert,” a famous Vermeer that has been lost ever since it was stolen from the museum’s collection in 1990.

All the contributed images of the real paintings will be together for the first time, available to view in the free digital museum called Meet Vermeer.

The Vermeer augmented reality app achieves digitally what is otherwise impossible in the real world.

“This is one of these moments when technology does something that you can never do in real life, and that’s because these paintings could never be brought together in real life,” said Emilie Gordenker, director of the Mauritshuis, reported The New York Times.

There are different reasons why all these paintings could never be brought together in one location in real life, according to Gordenker. Beyond it being highly unlikely that all the owners of the paintings would be willing to part with their precious artwork, the Gardner’s painting was lost and some of the 17th century paintings are simply too fragile to travel.

The next best thing is to have high-resolution digital image files of the Vermeers and that is precisely what the museums and private collections who own the paintings contributed to this project. The AR app gives the public a sense of each painting’s size in relation to one another, which is something that is not easy to convey when the image is presented as a flat picture on a digital screen (e.g. on a museum’s website).

When visitors of the digital museum open the app, they can look down at the museum from above as it has no ceiling. To enter one of the rooms, users of the app simply need to touch the phone’s screen and pinch their fingers together to access the room. Once they are in the gallery, the perspective shifts so that they face the wall where the 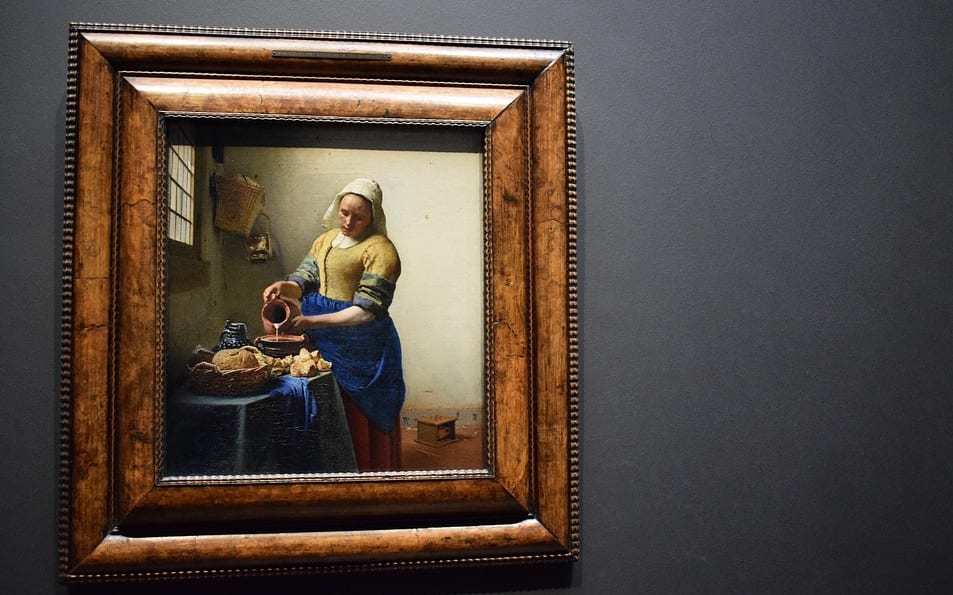 paintings hang. To approach each painting, they can zoom to obtain a closer examination of the framed artwork.

The free Vermeer augmented reality app can be accessed via Google Arts & Culture by anyone with a camera-equipped smartphone.