Farmland Dairies is joining the multitude of companies using QR codes as part of their latest promotional campaign to raise consumer awareness.

The company, a leading manufacturer of retail and foodservice branded milk and cream, will be using the codes in health clubs throughout the Northwestern U.S. The campaign is to promote their new dairy products that are enriched with fiber and omega-2 fatty acids.

Farmland is using static panels in more than 100 health clubs spanning from New York to Connecticut. The panels feature $1-off coupons and a QR code. When scanned, the code will take consumers to the Farmland mobile site set up for the campaign that will tell them how to receive free samples of their new products.

The company will be collecting data from those that participate that they may use in future campaigns and communications. Participants will have the option to opt out of allowing Farmland to share their information with third parties.

Richard Hirsch, EVP of the Health Club Media Network, says that the campaign is targeting consumers in their mid-to- 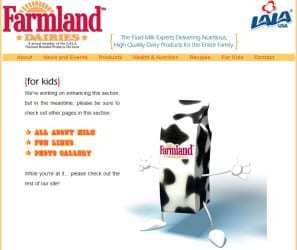 late-30s. “The average age of the health club member is about 35,” he says. “If you’re in your mid-30s, then you’re likely to be the primary household shopper in the family.”

Farmland Dairies has teamed with New Jersey based advertising firm Linett & Harrison, who created the campaign and suggested the usage of QR codes.

The dairy company is likely to pursue further uses for the codes in the future.