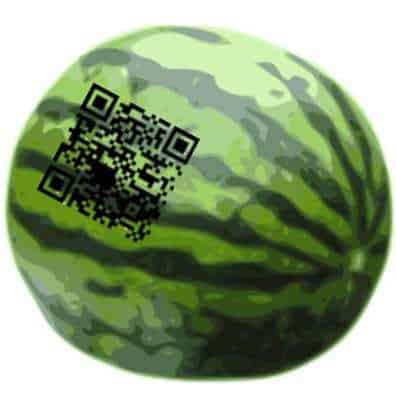 A new trial by the Pudong Agriculture Association will start labeling produce with the barcodes.

The Pudong Agriculture Association in China has just revealed that it will be starting a pilot program in which it will be labeling a specific type of watermelons that are grown locally, using QR codes.

The program is slated to begin in May as a part of a larger pilot geared toward improving food safety.

The intention will be to use QR codes on labels for 300,000 watermelons that are grown in the area. They will allow consumers with smartphones to be able to scan the barcodes on their fruit in order to learn more about where it was grown, by whom, and additional information so that they can better understand the history of their produce.

The QR codes will direct the user to a website that will provide a great deal of information about the specific fruit.

The watermelons that will be labeled with the QR codes will be those from the variety known as 8424. This is one of the city’s most sought after varieties, which is why it was selected for this pilot program. Furthermore, according to researcher Fan Hongwei from the Shanghai Agro-technology Extension Service Center, those melons are just coming into season, which makes them ideal for this type of testing.

The Service Center is responsible for overseeing the QR codes program so that a traceable fruit tracking system can be created for the produce that is sold within the city. Shi explained that the purpose is to increase the food safety for consumers. They are able to learn more about the products and communicate any concerns, or problems that they may have about the melons with the Pudong Agriculture Association, so that improvements can be made based on this feedback.