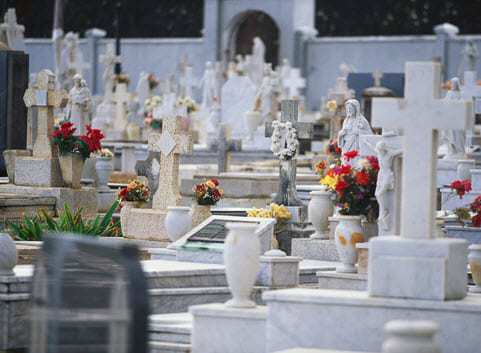 These barcodes will be found on tombstones at the Lincoln location.

It has just been released that grave stones in the Wyuka Cemetery, located in Lincoln, Nebraska, will feature QR codes that will allow visitors to scan and discover more about the people who are buried there.

Quick response codes have started popping up in burial sites all over the world.

The popularity of QR codes for a broad spectrum of different purposes – including everything from memorial sites to magazine ads – has encouraged this cemetery to join the many others around the globe that are beginning to add the barcodes to their grave markers. As the black and white squares have become much more recognizable among mobile users, it is starting to make sense that companies of all forms are finding uses for them.

Visitors to the graves can scan QR codes in order to visit memorial websites about the deceased.

The Wyuka Cemetery is giving families the choice to place QR codes on the tombstones and markers of their loved ones who have passed away. These simple barcodes give them the ability to provide a great deal more about the individual than what is written on the grave stone.

According to an employee of the cemetery, Sara Buss, this can not only help families to memorialize their loved ones, but it can also help to provide local history details regarding individuals of note who are buried there. About one grave’s contents, Buss explained that “He is a Nebraska serial killer, well known for a mass murder back in ‘58, ‘57.”

In that case, she had been discussing Charles Starkweather, a criminal captured in 1958 following a murder spree in which he was joined by his girlfriend, Caril Ann Fugate. Together, they murdered 11 people. He was executed the following year, and his grave remains a site of interest to many visitors.

Buss explained that “He is frequently visited. People are curious about him and what he means to, I guess, Lincoln, Nebraska and the history behind him.” That said, his criminal history is not etched into his tombstone. It is in this type of situation that QR codes can be highly informational to the visitors interested in this type of history. It can also help to identify the five among his victims who are also buried in that cemetery.