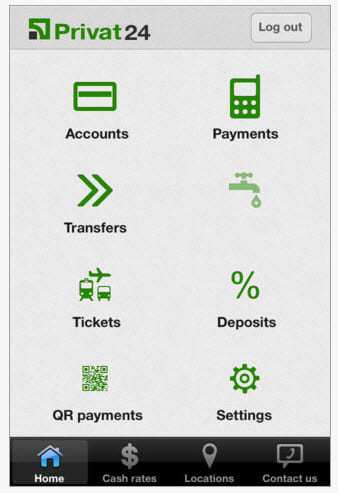 Transactions can be completed with the scan of a barcode by iOS and Android devices.

PrivatBank has just announced the release of the latest version of its Privat24 mobile payments app for Android and Apple iOS devices, which is centered around QR codes.

The service is available to smartphone using customers without a contract.

The bank has made this latest launch in order to keep up with what it feels are the expectations of today’s customers. They believe that smartphones will become an important part of electronic banking, and that it won’t be long before a wide and growing number of customers will be expecting the opportunity to make contactless transactions.

This latest edition includes the ability to use QR codes for contactless cash withdrawals from the bank’s ATMs.

Other services have also been made available through the latest generation of the app. The PrivatBank deputy chairman of the board, Aleksander Vityaz, stated that “In Privat24, customers can process contactless banking transactions using any, even the simplest, model of a camera-equipped smartphone.” He also went on to say that “Unlike NFC technology, contactless payments using a QR code do not require the application of special equipment and the purchase of additional cards or labels.”

The process is relatively direct and simple. Withdrawing cash or making a bill payment is a matter of scanning QR codes. This launches the app and scans the barcode meant for goods payment or on an ATM from PrivatBank.

The app allows the user to be identified and to choose the card from which the funds will be used to make the payment or withdraw the cash. A password is then entered by the user in order to confirm the transaction.

According to PrivatBank, it allows the customer to complete the transaction at least twice as quickly as using a traditional plastic credit or debit card for the same goal. Though hardly the first to step into mobile payments, this does make the bank the first to use QR codes in order to help to process contactless transactions at an ATM without the use of an actual credit or debit card.