A massive new piece by the artist features a barcode that can be scanned with any smartphone.

Artist Ruben Ubiera has not only just closed a show at the Young at Art Museum in Davie, Florida where he was also holding a workshop for children who enjoy art, and has permanent pieces in other galleries, but what is now drawing the greatest attention is the QR codes that he is using to provide his art with enhanced communication with the viewer.

These scannable barcodes are featured on a massive mural of eight faces of immigrants.

Ubiera has recently unveiled this most recent mural in Wynwood, Florida, where the eight faces provide more than just an experience of looking at this representation of immigrants. Instead, it also contains QR codes so that people with smartphones will be able to scan to hear the recorded stories of the individuals depicted within the artwork. 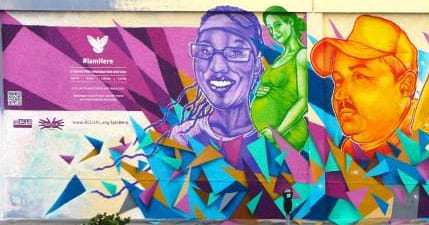 The QR codes allow for an oral history to be added to the visual art, enhancing the overall experience of the viewer.

The tales shared through the scanning of the QR codes are personal and raw, and express how the immigration laws in the United States have had an impact on each of their lives. This includes the story of a family who was forced to be separated, as well as the risk another person faced of being deported.

The Ubiera piece, and the stories shared through the QR codes, are meant to be a positive expression of the way that social changes can lead to better things. He chose vivid colors for a very bright and complex expression around this highly controversial, intricate, and sometimes heartbreaking issue.

The artist named the mural #IamHere, including the hashtag, which makes it easier for viewers to be able to share with their friends, family, and other connections over social media. In this way, he hopes to broaden the distribution of the message that is being shared within the artwork and through the QR codes. The artist, 36 years old, is also an immigrant, who was born in the Dominican Republic and is now a resident of Florida.