Some feel quick response codes will make it easier for consumers to identify genetically modified organisms, but not all.

Food made from genetically modified organisms (GMO) or that has been genetically engineered (GE) is a serious concern among Americans and QR codes have now made their way into this considerable controversy.

Polls have been showing that over 90 percent of Americans would prefer to have these foods identified on their labels.

That said even though the desire for food labels telling consumers whether or not they are purchasing GMO or GE products only three states have been able to pass labeling laws, so far, due to heavy lobbying against the labels by the food industry and the hundreds of millions they have spent on this effort. In July 2016, Vermont will start to require that food companies label their products if they contain GMO or GE ingredients. The agricultural industry is continuing to do its best to reverse this regulation before that time arrives. In this effort, QR codes have been thrown into the mix, leaving some applauding while others fume.

The reason isn’t that QR codes aren’t an effective method of data transmission, but in this, they are called too limited. 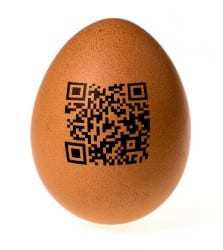 The food industry is hoping that in the requirement for labeling with regards to GMO and GE foods, a QRcode will be considered to be adequate. These barcodes can be scanned by anyone with a smartphone and a free reader app. That said, there have been a growing number of reports that have identified several reasons that quick response could be considered too limited and inadequate for the task, including a widely read and shared article from the Huffington Post, written by the founder and executive director of the Center for Food Safety, Andrew Kimbrell.

Within Kimbrell’s article, he identified the following reasons that QR codes aren’t the right solution to the GMO food labeling issue: they are “inherently discriminatory; they place the burden of informing oneself on the consumer; they may create privacy and security concerns; and their use could set a “dangerous precedent”. Both sides of this issue are attempting to move very quickly before the deadline arrives.