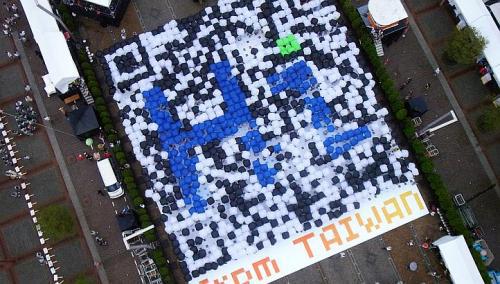 Over 1000 people in the country came together to create a massive human barcode.

On Sunday, more than 1000 people in Taiwan worked together on a promotion for the island, which created QR codes made out of people, in the hopes that they would be able to draw the attention of the world.

The effort was designed to profit from the increase in smartphone use around the world.

This is because the growing global penetration of smartphones has meant that a larger number of people have the capability of actually scanning QR codes. These barcodes are used quite commonly by mobile marketing companies and brands that are seeking to direct users to their websites, increase awareness about their promotions, or to share social media sites, videos, or other content that users may find interesting and relevant.

Creating the QR codes had 1369 people with umbrellas standing in the Taipei City Hall square.

The QR codes were highlighted by the word “Hi” in blue, in the middle of the square. Organizers said that the over thirteen hundred people all arranged themselves to define the barcode that could be seen from directly above.

According to a Sayling Wen Cultural & Educational Foundation spokesperson, “While there may be many other different ways to promote the image of Taiwan, we chose this special way to do so.” That organization is a nonprofit that is attempting to use mobile marketing to capture a whole new audience.

The spokesperson went on to say that “As long as smartphone users take a photo of the trademark code, they can easily link to our website where various colorful events of Taiwan are shown and will be continuously updated.”

Though the event was specifically created by the nonprofit organization, there were dozens of different companies from Taiwan that added their staff members to the effort to assist in the creation of the record breaking QR codes. Among them was EVA Air, the air carrier, as well as Giant, a bicycle maker.

Since Taiwan’s split from mainland China in 1949, which brought a civil war to its end, it has been politically isolated. They have been taking part in a growing number of unique efforts, such as with these QR codes, to capture the attention and fascination of the world.