The Hayes Historic toilets can soon be visited without actually having to head underground to see them.

Cardiff, the capital of Wales, has a very unique and fascinating historic attraction in the form of Victorian bathrooms, and now QR codes are being displayed to give visitors the chance to see them, without actually having to go underground – a trip that many tourists would rather not take.

The Victorian toilets are located under the Hayes, which is a commercial area within the city, known for historic sites.

While the underground bathrooms date back to Victorian times and do offer an unusual view of one part of the city from that time, not everyone is interested in taking the stairs down under the busy city shopping area in order to actually see them. The solution that has been discovered to overcome this problem has been created in the form of QR codes. They allow people to be able to scan and see the toilets underneath the Hayes Island Snack Bar, without having to make their way into their subterranean location.

The QR codes are going to be displayed in order to give people the chance to have a look, while staying above ground. 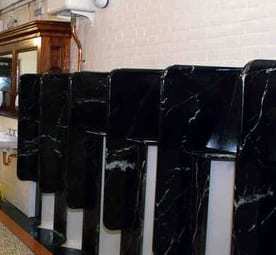 Seeing what is down there is certainly considered to be worthwhile for many tourists. Like the QRcodes, themselves, these first public toilets in Wales were meant to provide the city’s residents with a convenience and an improvement to overall sanitation. Now, visitors to Cardiff can learn all about them, regardless of whether or not they head down in person. Scanning the quick response codes brings the mobile device user to a website that provides images and further details of the history of the attraction.

The public toilets, themselves, first opened in August 1898. They are Grade II listed and apparently saw quite a bit of excitement on opening day, as it featured a “flourish of trumpets”, said the mobile friendly website. In 2010, the underground location underwent a refurbishing worth £148,000.

The project using the QR codes was a joint effort between HistoryPoints information and the owners of the Hayes Island Snack Bar. The barcodes are to be installed on the steps that lead from ground level down to the toilets, themselves.