One of the largest cab operators in London, Radio Taxis, is now using QR codes and NFC stickers on its fleet of approximately 2,500 vehicles in order to promote its smartphone app and encourage a larger number of consumers to download it.

The use of these stickers automatically directs mobile device users directly to the app’s download link.

By either tapping the near field communication enabled stickers or scanning the QR codes, the mobile app can be downloaded so that, from then on, they will be able to hail the nearest Radio Taxis cab with the convenience of a single click. They will also be able to access real time information about the location of the vehicle so that they will be able to know exactly when it will arrive.

At the moment, these QR codes and the NFC technology is available for only Android and Windows Phone users.

Phil Coote, the CEO of the company that encoded and printed these custom stickers on behalf or Radio Taxis, RapidNFC, explained that “We are seeing an increased uptake of clients using NFC to promote app downloads by Android and Windows Phone users.”

As Apple has yet to release a product that is enabled with NFC technology, it makes sense that the company would focus its efforts on the devices that are used the most and that are compatible with all of the tech being used to market it.

Coote went on to explain that “By placing the NFC tags within their fleet, Radio Taxis have been able to maximize the opportunity provided by the dwell times of passengers.”

The stickers, themselves, feature the QR codes but are also enabled with the additional NFC technology so that they can si 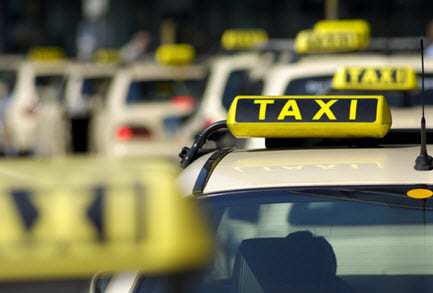 mply be tapped as tags in devices that are enabled with that tech. They have been supplied by Smartrac in the form of BullsEye tags. It will be interesting to see how often these barcodes are used and how many downloads are generated as a result of their presence.