California restaurants are experiencing a rise in “fish fraud” and a mobile friendly barcode is helping to stop that.

There is a growing problem in California restaurants, as well as in other areas of the United States, and a sushi chef is hoping to use QR codes to put the practices around it to a dead stop.

The issue has to do with the use of fish that is far less than fresh in sushi and other restaurants.

The practice of gassing fish with carbon monoxide in order to maintain its color and brightness far after it has expired could lead unsuspecting consumers to eat bad fish. Similarly, a practice of substituting a mackerel form of fish that can cause dysentery, and which has been banned for many years in Japan, is being illegally plated as “white tuna”. Processing plant floors are collecting containers full of fish scraps to be boiled down in order to be served as expensive upscale maki rolls. 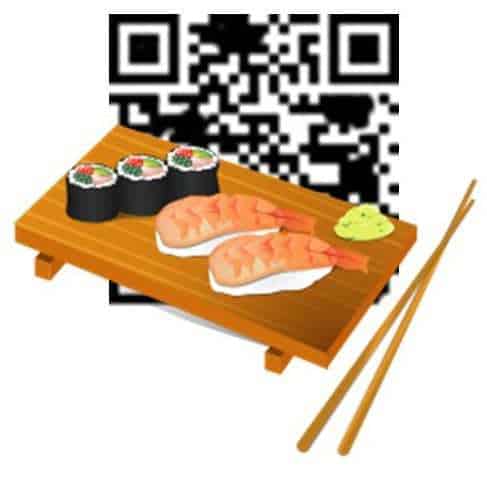 Rob Ruiz has had enough of hearing about these unethical practices and is using QR codes as a part of his fight.

Ruiz is the executive chef at Harney Sushi in San Diego and has already been using edible QR codes to help his customers to be able to scan using their smartphones to learn about the type and source of the fish that they are eating. Now, he is using this hottest sushi location in the city to help to enlighten consumers as to the “atrocious” practices that he saw while working in other places before he came to his current post.

The use of the QR codes in his restaurants has now become considerably more important to consumers who want to be sure that they are receiving what they think they are, that their fish is fresh, and that they are avoiding some of the potentially dangerous practices that are occurring in other places.

The QR codes in this restaurant are printed using water based ink on rice paper. They are then displayed on top of the sushi that the restaurant serves. This allows diners who have smartphones to be able to scan them to find out more about the sustainable nature of the species, the state of the stock of that species globally, where the fish was caught, and can even see who the fishermen were that made the catch.

These QR codes could potentially play an important role in combating the issue that, according to a recent report, is leading 42 percent of Southern California seafood to be mislabeled – the highest rate in the country.