Visitors to the “Villa Community” located in Beijing’s Zuhui District near Hunan Road can scan the quick response codes.

In Beijing, the area around Hunan Road in the Xuhui District called the “Villa Community” has now added a new feature using QR codes that is meant to provide visitors and locals, alike, with information about the historic buildings.

To start, the quick response codes have been added to twenty historic buildings within the area.

The QR codes can be scanned through the use of smartphones and they allow people to learn more about the specific buildings and their histories. For now, the program is considered to be a trial, which has been launched by the local cultural heritage authority. Each of the twenty buildings has received its own quick response code that can be scanned using any free barcode reader app on a smartphone or tablet.

The QR codes direct scanners to both audio and visual information about the various buildings. 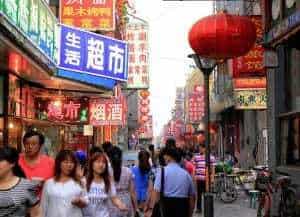 According to a local housing official, “By scanning the codes, visitors will be able to access audio and visual information about the properties.” He also added that “The service is provided in both Chinese and English.”

One of the various buildings that was assigned a QRcode during this trial program is a house at the address 113 Wukang Road. This was once the home of Ba Jin, who was also known as Li Yaotang (1904-2005). That individual is among the most widely read 20th century writers from China.

When a smartphone user scans the barcode which is posted at the site’s entrance, he or she gains access to a map of the building’s interior, as well as images of Ba, and pieces of information about both his life and his work.

Other buildings that have been included within this QR codes pilot project include the Dingxiang Villa, which had once been the location of the Italian Consulate, as well as the former home of Huang Xing, who was a primary figure within the 1911 Revolution, when the Qing Dynasty of 1644-1911. Another building was the home of Du Yuesheng a local gangster.