A new piece by Banksy has criticized the use of teargas in a refugee camp located in Calais.

Banksy has now completed a new artwork in the form of a mural that has used symbolism and QR codes in order to criticize the use of teargas in the Calais refugee camp that is known as the “Jungle.”

The mural appeared on the French embassy in London and has drawn massive attention to the issue.

The piece, itself, uses the well known image of the young girl from the musical and film, “Les Misérables”, based on the book by Victor Hugo. The teary eyed girl watches on as a cloud of CS moves toward her. This mural suddenly appeared overnight, last weekend. What makes this piece unique when compared to the style that is typically used by Banksy, a graffiti artist, is that this particular mural has incorporated QR codes into the imagery. Beneath the scene, the quick response code has been stenciled in.

The QR codes can be scanned by smartphone users in order to automatically access a video. 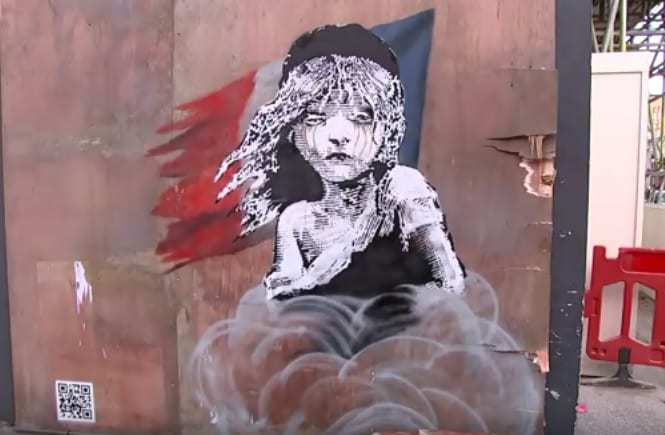 By scanning the QRcode, smartphone users can view a video that shows the police raid that occurred on January 5, within the refugee camps. The artwork is the latest in a number of pieces that Bansky has created in order to criticize the way the refugee crisis is being handled within Europe.

This mural is a statement that directly opposes the attempts that were recently made by French authorities in Calais, as they tried to bulldoze part of the camp. The reason they had been seeking this action was that the portion of the camp in question has been determined to be unsafe. That said, it also mean that 1,500 refugees needed to be evicted.

Last week, the media received quotes from Steve Barbet, a spokesperson from the Calais police, saying that teargas had not been used in order to clear the refugee camps. He explained that “It’s not in our interest to use teargas unless it’s absolutely necessary to restore public order, and it is never used in the camp itself.”

However, in the video accessed by the QR codes, which is posted on YouTube, over a period of seven minutes, it is clearly shown that rubber bullets, tear gas and concussion grenades had all been used by the police during the January 5 raid.