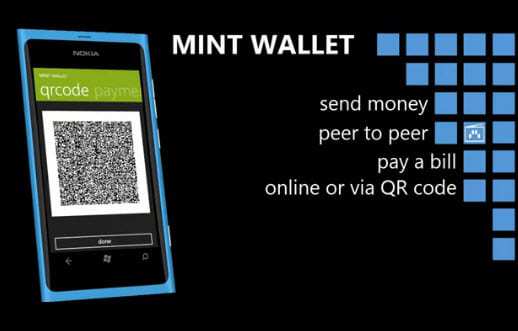 MintWallet won the $50,000 prize with its Windows Phone app.

The challenge created by the Royal Canadian Mint was designed in order to encourage the development of an app that will clearly illustrate the advantages of using digital funds over actual cash, and was met with a winner that used QR codes as the heart of its functionality.

Among those features are the ability to request money from another party or to send money. It is based on a peer-to-peer network, which allows users to connect with others and gives them the ability to make digital cash transfers.

QR codes are used to simplify the process of payment completion.

These mobile barcodes are used in a way that generates a QR code for every payment request. This way, all a user will need to do is scan the code – for example, on a parking meter – and he or she will be able to send digital funds that will pay for the product or service – for example, the parking spot use.

The MintWallet also has a feature that allows more than one individual to split a bill. This is designed to help to reduce the hassle when multiple people want to pay for the same item. A common circumstance in which this is relevant occurs when groups go out together at a restaurant. The QR codes and the app allow each person to contribute as much as they want to the total of the bill

The winners of the contest were selected by a panel of seven judges. This panel consisted of the following people:

A gold wafer worth $17,000 was awarded to the developer of the QR code based app, Jan Hannermann, who intends to port MintWallet to Android and iOS.