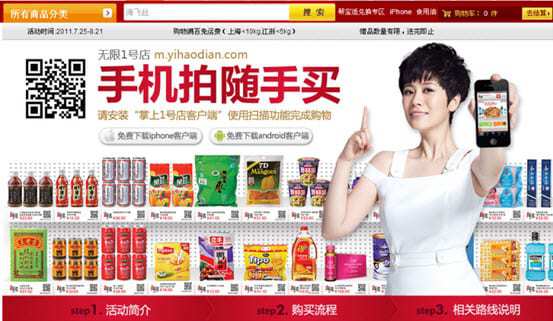 Yihaodian has unveiled its intentions to open 1,000 barcode based shops.

The largest food e-commerce site in China, Yihaodian, held a press conference in which it announced its massive step into mobile commerce through the use of QR codes.

The announcement showed that a thousand virtual locations would open across the country.

These supermarkets, which will be called “Unlimited Yihaodian” will use QR codes and product images in order to allow people to create their shopping lists, fill their carts, and make their orders. The stores won’t feature any actual physical products.

Scanning the QR codes is all that is needed to add the associated item to the cart.

This allows the consumer to use a smartphone to walk through the virtual store and scan all of the item QR codes in order to add the products to the virtual shopping cart. Then, when the list is complete, the items are purchased in an online checkout process, and the completed order will be delivered to the customer’s homes. That element of the process works in the same way as the standard website for Yihaodian.

This is not the first time that the company has used QR codes for virtual stores. However, this is by far the largest installation of the mobile barcodes that it has faced. Previous ventures have included much smaller virtual stores that were positioned in some of the large city subway stations in 2011.

The success of those previous projects brought about this latest effort, which will be made up of virtual supermarkets that will be nearly 4,000 square feet in size. To give some perspective, this is the size of approximately 10 average apartments in urban China. These stores will each sell approximately 1,000 items that will each have their own unique QR code so that they can be added to shopping baskets.

The hope is that this will help to bring offline and online purchasing together, and that this m-commerce technique will help to eliminate some of the inconveniences of traditional grocery shopping. These include having to carry awkward bags from the store and transporting them home, as well as having to wait in checkout lineups.