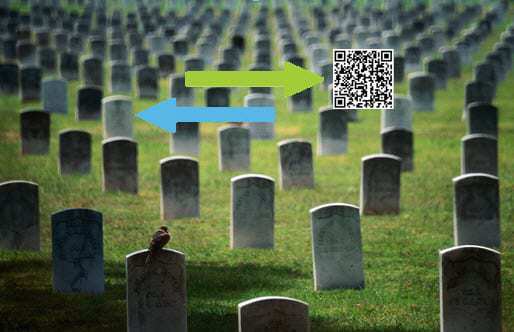 Barcodes on tombstones are allowing mourners to and cemetery visitors to learn about people buried there.

Although QR codes may be most recognized for their placement on magazine ad pages and product packaging, there is a growing trend around the world that is also placing them on grave markers in order to allow loved ones to memorialize those who are buried beneath them.

They are also allowing other visitors to learn more about the people buried in the cemetery.

Though the concept of using QR codes in this way is most popular in countries such as the United States, the United Kingdom, and Denmark, this trend is also starting to make its way into other areas, such as emerging markets. This is the situation in the case of EverMe, a company based in South Africa.

It places QR codes on cemetery markers such as gravestones and other locations.

These custom quick response codes allow individuals visiting the location to scan them using their smartphone so that they can learn more about what an individual buried in that cemetery did while they were still alive. This digital memorial provides a webpage that can include everything from an obituary or written biography, to photos and video, and even GPS coordinates so that the precise location of a grave and where the funeral had been held can be easily found.

It is even possible to include a book of condolences on the page, where those who have scanned the QR codes can share their thoughts, memories, and sympathies. These messages can be left privately for the family of the deceased individual, or posted publically so that everyone can read the words. Admari Wilson, the managing director of EverMe has pointed out that without the barcodes, the information that is available on a traditional grave marker is very limited. He said that “our lives are more than a dash between two dates.”

It is the information that is represented by that dash that the QR codes help to fill in. It may be only a simple barcode, but it holds the key to a great deal of information that is posted on the internet for loved ones and other people to discover about the people from the past. It can help in making sure that the memory of the departed individual can carry on.