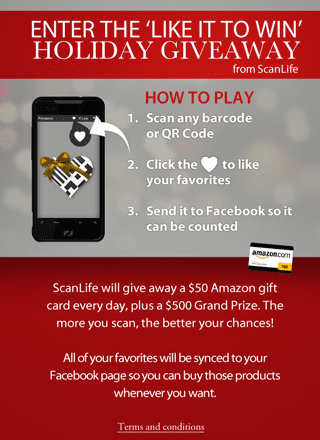 A new integrated application gives users the opportunity to “like” their favorite barcode scans.

A brand new version of the ScanLife app has been released just in time for the start of the holiday shopping season, allowing smartphone and tablet users to “like” certain barcode scans and instantly create wish lists on their favorite social networks, such as Facebook and Twitter.

The goal is to make it easier to discover the very best barcodes and the products associated with them.

This new feature is only one of a series that has been released in the latest version of the ScanLife app. It has been upgraded to include new major features that are designed to assist smartphone users in taking advantage of everything that mobile commerce has to offer, through a connection with the social experience.

The new features also include the chance to see how popular QR codes are among other users.

This iOS and Android friendly app functions both with QR codes and other standard barcodes that are located on product packaging. By scanning, users can discover the popularity of the item among other users of the app, and then share this information – including prices and deals that have been discovered – with their social network friends. This turns the user’s smartphone into an important and helpful tool for helping to make sure that the perfect gift is always found.

According to Mike Wehrs, the CEO and president of Scanbuy, the mobile engagement solutions provider that created the ScanLife app, “The new version of ScanLife turns its millions of active users worldwide into a social community, making it easier to discover the best content from QR and other format barcodes.”

Wehrs also added that “We have a very active and globally diverse user base, and this new app will enable them to easily discover and share what’s trending. We believe this opens a completely untapped space which intersects the physical, mobile and social worlds in which we live.”

As a part of the launch of the new app and its features for QR codes and barcodes, ScanLife is also holding a “Like It to Win” holiday giveaway that gives users the chance to win Amazon gift cards.