Functioning along the same principle as bar codes, scanning a QR Code with your smartphone’s camera (providing you have a code reader app) enables you to quickly and easily access a website. No more frantically writing down a website URL on a greasy napkin.

Of course, whenever a new convenient technology comes along, there always have to be those kill-joys that need to find a way to ruin it for everyone for the sake of their own gain, or just pure plain malice. Hackers and other unsavory types have discovered that they can use those QR codes to infect your smart phone with malware, steal information from your phone, or direct you to a phishing site.

Mobile malware increased more than 1,000-percent in 2012 alone, according to Catalin Cosoi, Chief Security Researcher, BitDefender. With more people turning to smart phone technology, hackers and criminals are increasingly turning to hacking your mobile device, which in general is less likely to carry security software. Think about it. You probably have Norton or McAfee for your desktop, but have you thought of a similar defense for your smart phone? Hackers are counting on you not doing so.

Scared yet? How about if you discover that with a malicious QR code, a hacker can actually seize control of your smart phone, listening in to conversations, activating the GPS or the camera, and reading text messages.

So, when you get right down to it, there’s a definite possibility that your smart phone could be at risk from hackers, via the awesome new technology of QR codes. Maybe it’s not probable, but it is possible. Is the risk worth it? 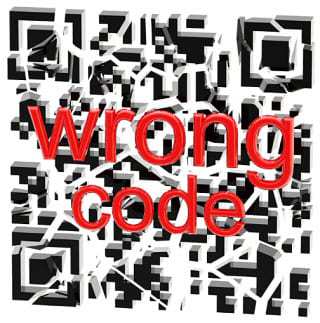 What To Do?
Other than outright avoiding using QR codes altogether, there are still some measures you can take to decrease the odds that your mobile device could be compromised.

There’s a credit/debit card hack that criminals pull, where they place their own special card reader over the business’ actual legitimate reader. This happens often with self-service places like gas stations. Much in the same way, hackers can create QR code stickers and slap them over legitimate QR codes, so that instead of you being taken to say, some restaurant’s special promotional site, you get diverted to the hacker’s phishing site. Check to make sure that the QR code you see hasn’t been placed on top of a legitimate code.

Second, use a QR code reader that actually takes security into consideration. For instance, Norton Snap shows you the content before actually sending you there.

Finally, make sure your QR code reader app (and there’s many to choose from), allows you to check out the decoded text before you open it up. Since there’s a lot of QR code reader apps out there, shop around and find one that offers you the peace of mind of security.

Conclusion
It’s a sad fact of life that every advance in computing comes is accompanied by a downside in the form of hackers and other malicious individuals. But there is no reason that you can’t enjoy the convenience of QR codes just as long as you take the proper precautions.

Byline: John Terra has been writing freelance since 1985, and writes about everything from Internet security to maintaining a good online reputation.