A survey of customers revealed that most of the quick response codes weren’t working when scanned.

A survey of egg crates and their labels have shown that there are quite a few QR code problems on the packages. The Consumers’ Federation announced that the nutrition facts on the egg packages in Taiwan were not visible. Moreover, the quick response codes that were supposed to replace them aren’t working.

The QR codes were supposed to provide consumers with information when it was not on the actual label.

The Consumers’ Federation identified a number of labeling and QR code problems on eggs in Taipei. The survey revealed a considerable lacking in appropriate labels on most egg packages. It conducted a survey of 19 packaged egg brands. The goal was to look into the certification labels, prices, advertising claims, expiration dates, nutrition facts and quick response codes.

There were 10 standard QR codes and 9 traceable agricultural product (TAP) QR codes among the scanned barcodes.

The QR code problems appeared in both types of barcode on the egg crate labels. 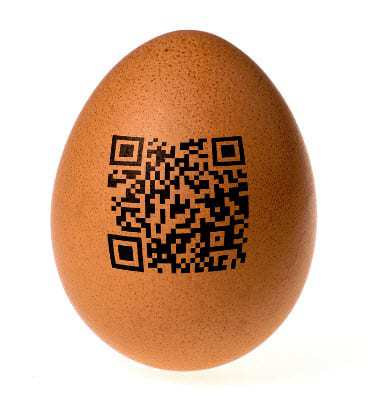 According to Alan Lu (陸雲), the foundation chairman “The TAP QR codes show that the production process of the eggs was safe [and that the eggs] do not contain pesticide residues, are of good quality and recognized by the government.” He also added that the product source QR codes are generated by the producers themselves. They provide only limited information about those companies, he said.

Among the 10 packages that had product source QR codes, 8 were not properly scannable. Even if a barcode scanning app recognized the barcode, they didn’t necessarily lead the customer to the proper webpage or even the right site, said Lu.

Two of those barcodes brought the consumer to a company site, but the traceability info for the product was unavailable. Moreover, the labels printed on the package were deceitful and misleading, said Lu.

These labeling and QR code problems man that the majority of packaged eggs provide no method with which consumers can obtain accurate information. This includes both the traceability of the product and the nutritional information with which people make their food choices.