At the end of June, our QR code investigators looked into the importance of making sure that a campaign that uses the barcodes is mainstream enough to ensure that people will actually use them, and now they have revisited the topic when it comes to the specific ways in which quick response codes can actually allow marketers to take advantage of other traditional forms of ads and promotion that haven’t received the social nod.

This, namely, has to do with coupons, and the areas in which they are considered to be socially acceptable.

While few people would even think twice about redeeming a coupon for a discount at the supermarket, a free carwash, or a free gift with a purchase at a cosmetics counter, this is not the case in every place that a consumer spends his or her money. Nightclubs are a perfect example of the type of venue in which it is likely not going to be considered all that cool to whip out a discount coupon in order to take advantage of an offer – no matter how great it may be. When heading to this type of venue, a person is trying to look and feel great; for many people, that impression isn’t maintained when a coupon is redeemed. Instead, it suggests cheapness. The solution to this problem could be as easy as a QR code scan.

A QR code can help consumers to be able to benefit from coupons and stay cool at the same time. 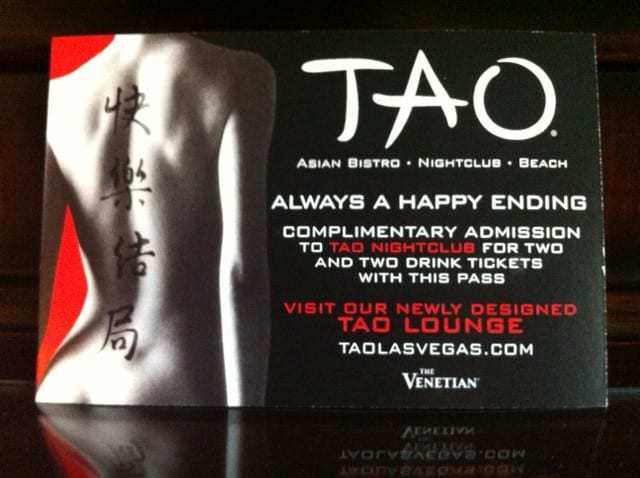 The above image is a wonderful example of the way that coupon marketing is currently performed. This is a visually appealing printed card that has a very attractive offer that could provide considerable savings to someone who redeems it. After all, complementary admission for two on top of two free drink tickets isn’t anything to simply shrug off. However, due to the trendy atmosphere of the Tao nightclub, many guests would likely choose not to take advantage of this great opportunity because they would find the redemption of a paper coupon to be embarrassing.

This fantastic form of marketing could be easily improved and redemption rates could considerably increase if a QR code were added to the coupon. This could allow a smartphone user to scan the quick response code in order to obtain a digital copy of the coupon offer. That way, upon arrival at the nightclub, the offer could be redeemed simply by flashing the smartphone screen. Nobody other than the mobile device user needs to know that a coupon is redeemed – not even his or her date!