The QR code has certainly become mainstream, as they can be found just about everywhere we look, nowadays, from billboards to product labels and from magazine ads to store signage and displays.

But as common as these barcodes may be, the actual scanning has not yet become as typical.

The barcodes and the services are out there, but for the most part, consumers have yet to get on board with the idea of taking out their smartphones while in public, in order to use them for purposes such as making mobile payments and scanning QR codes. Somehow, for the majority of people, it still feels strange to do it.

This has presented a challenge to companies attempting to use a QR code to engage consumers.

The style, position, and purpose of the quick response code all play a very important role in the ability to encourage consumers to actually take out their smartphones and scan. After all, as engaging as the content of a QRcode may be, it must be scanned in order to find that out. This means that part of the challenge of creating an ad isn’t just developing excellent content to which the barcode will link, but to actually encourage smartphone owners to break from the current norm and actually use their mobile devices to scan a barcode that is placed in public. 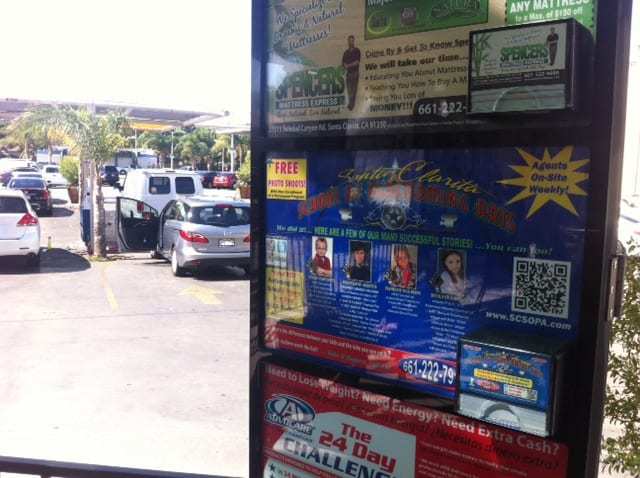 The following is an example of a public use of a barcode that was discovered by our investigators, this week.

– Santa Clarita School of Performing Arts – This company has placed an ad in a clever location in Santa Clarita, California, at a car wash. The ad is located within view of the drivers (and their passengers) as they wait for their vehicles to be dried. This is the only ad among several that currently features a QR code. The position is fantastic, as it can easily capture the attention of individuals who have nothing better to do than wait. Unfortunately, when scanned, it leads to a website for a dance studio that has not been mobile optimized. Moreover, the ad doesn’t provide any incentive to make a scan, such as a video of a segment of a dance class or an offer for a free introductory lesson.

That said, it does look like scans are becoming more popular, in general. In a recent copy of OK magazine, the “What’s Hot and Trendy” section featured hip hop recording artist, Common, as he paid for his purchases at Whole Foods through the use of a smartphone scan at the checkout counter with the Isis mobile wallet app. Could it be that using mobile devices for a range of new purposes is becoming more common…so to speak?