Quick response codes may be something that we always see at home, but they’re with us on vacation, as well!

When it comes to the QR code, the majority of people – including our investigators – most commonly associate it with product packages and ads in magazines and circulars, but this week we discovered that they can play a spectacular role in the tourist experience while traveling to an exotic getaway.

A traveler vacationing on the Big Island in Hawaii can enhance the experience considerably by scanning.

From the airplane to the hotel and all of the marketing exposure in between there are ample opportunities for a traveler to boost his or her possibilities for gaining thrilling or relaxing experiences, as well as to save money with some great deals. The Big Island of Hawaii is a tremendously popular tourist destination and it is clear that marketers were taking advantage of every opportunity that was presented by the fact that the majority of tourists are now carrying smartphones with them wherever they go.

The following are some examples of QR code marketing with the vacationing tourist in mind. 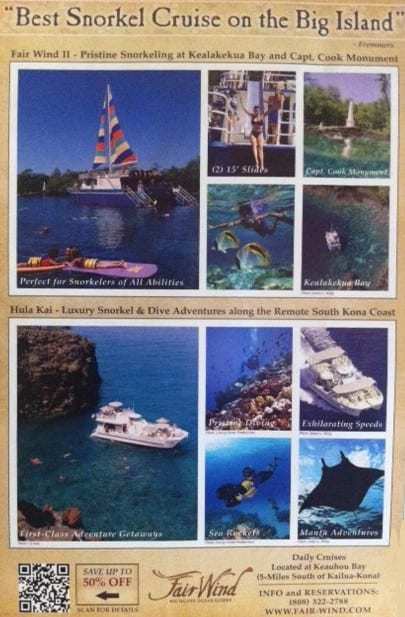 Consider the following examples of QR codes that were found on the way to – and in – Hawaii with tourists in mind.

Fairwind – This use of QRcodes hit the nail right on the head in a very well designed magazine ad. The advertising was found within an in-flight magazine, which is the ideal place to capture the attention of an audience that has absolutely nothing better to do than look at the magazines and see what there is to do upon arrival. The Fairwind ad was one of many found in the Hawaiian airlines magazine.

This one managed to stand out by providing a quick response code with a fantastic call to action – a 50% savings and to scan to learn more. Fortunately, good quality scanning apps will work even in airplane mode. They save the barcode in the user’s history so that it can be accessed as soon as there is data or WiFi connection available. When internet access was available, it revealed an appealing, easy to use, mobile friendly site with all of the applicable details for the deal.

Safari Helicopters – This ad was extremely well created in that it had a considerable “go big or go home” effect. It featured three different calls to action for its 3 smartphone barcodes. Unfortunately, as much as it was very successful in driving tourists to scan, it failed after that point. Once the first barcode was scanned, it revealed a coupon with an expiry date in 2012! Moreover, there were no additional buttons on this expired offer to reach either the website or the social media pages for the company. The second barcode did well, as it led to a functioning video. The third , strangely, led to the exact same video as the second one.

Pacific Aviation Museum Pearl Harbor – This barcode offered the opportunity to obtain a discount coupon for a combat simulator flight experience. When the QR code was scanned, it brought the user directly to that coupon, as promised. While it did exactly what it was supposed to, the only thing that was lacking was a bit of a “wow” factor. At the same time, it was certainly appealing and it delivered, so it can’t be greatly faulted.