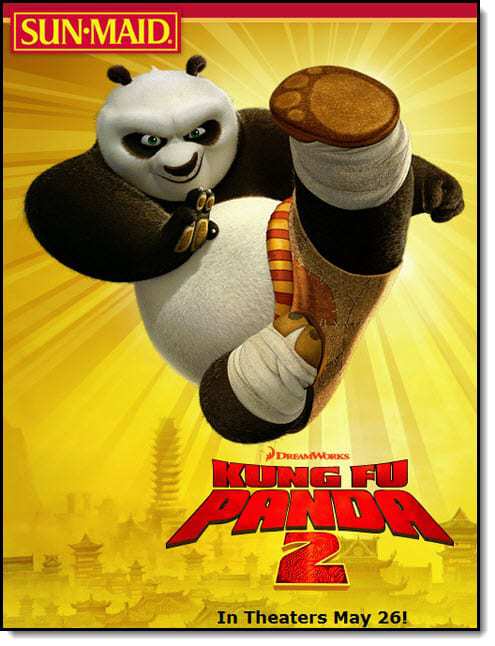 California raisin producer Sun-Maid has allied with Dreamworks, a massive American film studio, to promote the studio’s new movie “Kung Fu Panda 2.” Such partnerships are common in the world of business but the promotional campaign has gained a fair amount of interest for its use of QR codes. Sun-Made will begin using the codes this month on their products, giving consumers a chance to see exclusive digital content and connect with the brand. A sweepstakes, sponsored by Dreamworks and hosted by Sun-Maid, will also be available to those that scan the codes. Sun-Maid’s QR campaign will begin this month and continued through September.

When scanned, the codes resolve to a mobile website where consumers can find movie trailers, character profiles and other digital content to be used either on their smart phones or PCs. Entry into the sweepstakes is handled through scanning the codes as well. The grand prize is a trip for four to Zoo Atlanta in Georgia.

This is not the first time the two companies have come together. Last year, the team promoted the last installment of the “Shrek” franchise. This is, however, the first time either has used QR codes together. Sun-Maid’s vice president of brand management, Rick Bruno, believes that using the code will allow the campaign to reach a broad spectrum audience.

“By keeping the promotion simple and easily accessible by mobile devices,” says Bruno, “we anticipate a lot of response and overall site activity.”