Warrington based business Appitized, today announced the start of development for the official St. Helens R.F.C. Smartphone App. The App, which will provide fans with access to exclusive club news and features, will be available to download for iPhone and Android devices later this year.

The App is set to include exciting features, providing fans with exclusive information and the ability interact with the club directly via their Smartphone. App features include; Fixtures, Live match updates, Fan Zones, Superstore and Player’s biographies. The App will also include an in-built QR Code Scanner powered by QR Pal, which will enable fans to scan QR codes around the clubs new home stadium.

In addition to the above features, the App will also give the fans the power to vote in real time during each game for “Man of the Match”. By simply downloading the free App, fans will be able to vote throughout each game, with the winning team member announced at the end of every match.

St. Helens R.F.C. will join a select number of sports clubs now embracing mobile technology in 2012 to update and interact with fans. 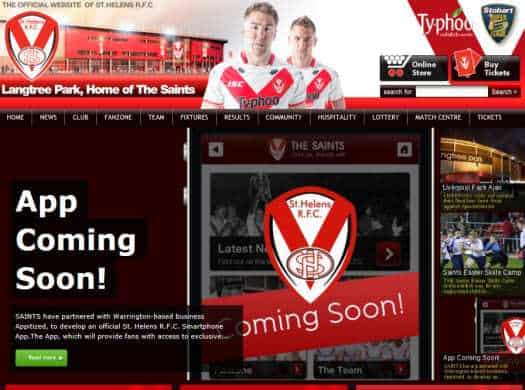 “We have seen a dramatic increase in social media across all our platforms in the last 18 months,” said Saints Media Manager Mike Appleton. “It is the quickest way of getting information out to fans as well as interacting with our loyal supporters.

“We have more than 10,000 people following us on Facebook and our Twitter site interacts with more people on a tweet by tweet basis than any other Super League club. The App development is part of this strategy and we want more fans to know about the Saints and be able to interact with us on multi-platforms.”

“EMS have developed an outstanding website for us and we are delighted to partner with them to deliver this important technology. We’re sure all of our fans will enjoy the experience.”

Appitized is part of the EMS Group, the company behind the official Saints Website. Managing Director, Anthony Wilson said; “We are delighted that after our successful relationship with Saints’ website and online presence, we have continued our partnership by signing a deal to create their new App.

“Our joint aim is to create a memorable experience for fans and corporate members alike and for Saints to be the market leader in the Rugby League arena for its mobile offering. We are very excited about Saints’ commitment in embracing the power of mobile technology and the rewards it will undoubtedly bring to the club.”

With a new £30m stadium, dubbed “The best stadium in rugby league” and an official smartphone App in development, 2012 is looking like a great year for the Saints. Both the club and Appitized look forward to introducing the App to Saints fans in the very near future.

*About St. Helens R.F.C:* St. Helens R.F.C have a long and glorious history that dates back to their formation in 1873. Since then they have won more than 50 major trophies and are the most successful club in the summer era – www.saintsrlfc.com

*About Appitized*: In 2011, Mobile Website and Mobile Marketing agency EMS Media created Appitized to meet the increasing demand for mobile applications from customers. Since then, Appitized has gathered a strong team of App developers who cover all mobile platforms (iPhone, Android, Blackberry and Windows Phone) including Tablet App developers (Android and iPad). They work alongside our experienced App designers and project managers who strive to deliver the best products on the market – www.appitized.com