The use of these QR code posters was the idea of student Jack Armstrong.

Posters displaying Northeastern Flowcodes have been appearing all around campus as student Jack Armstrong has been using them to help connect people.

The freshman’s use of the QR codes is meant to encourage other students to scan and interact.

“It’s going to be awesome,” said Armstrong, who worked on the Northeastern Flowcodes with the university’s marketing team. He had already worked with the team on other projects for which he generated the barcodes. Among them included a project that included a QR code at the bottom of tens of thousands of alumni postcards that directed recipients to the “Your Degree is the Key” landing page. He also generated a code for the university’s Veteran’s Day celebration posters last November.

Now, with marketing interactive media classes helping to guide him, he is using the barcodes everywhere he can, from his Twitter page to his Stetson dorm room door.

“My goal for this is to just engage the campus more, 100 percent,” explained Armstrong.

The Northeastern Flowcodes can be found all over the place, displayed on the Boston campus.

These posters with unique round versions of the traditional QR code are a safer alternative. Moreover, they also provide scanners with a richer multimedia experience, argued Armstrong. This type of quick response code has been working to distinguish themselves from their square, pixelated previous generation design.

Flowcodes make it possible to incorporate tailored branding. That said, they also provide the opportunity for people who scan the codes to choose precisely what they do or do not share when scanning. These round barcodes come in any color the designer wants and can be branded in a series of different ways.

While traditional QR codes are being used in everything from restaurant menus to bills that need to be paid, Armstrong is using this next generation version to help people to connect. He learned the value of these types of connections during a summer job selling t-shirts and while watching restaurants pivot to survive restrictions 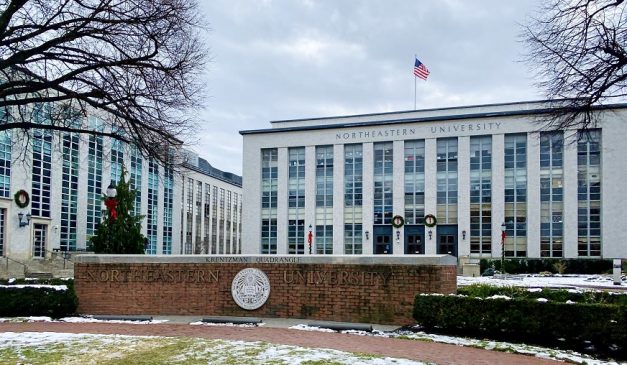 Now, he’s using the Northeastern Flowcodes to help to connect people on campus. “I love relationship capital and the feeling of connecting people,” said Armstrong.