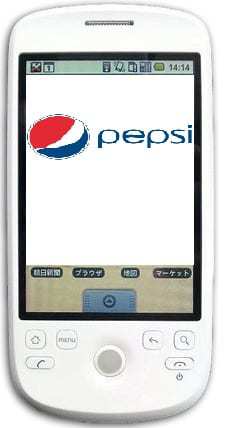 The new “Out of Home” advertisements for Pepsi products are displayed on city subways.

Tokyo commuters taking the subway will now have a new way to keep themselves occupied while learning about Pepsi products, through a new campaign using NFC technology on stickers.

Consumers with compatible smartphones have been using the “Pepsi Special” stickers since Nov. 16.

The campaign is considered to be an experiment by Tokyu Agency, Inc., which has launched the campaign on behalf of Pepsi and Suntory Beverage and Food, Ltd. The NFC technology has been integrated into tags on stickers and posters in train stations in Tokyo. The ads encourage smartphone users to tap their smartphones against the add to set up an app download on the device.

This NFC technology skips the step of having to read a barcode, which has been the more traditional method.

The mobile marketing team behind the campaign is hoping that this type of advertising using NFC technology will be more convenient, simple, and appealing to consumers. It allows consumers to simply touch their smartphones to the advertisement in order to download apps, view videos, listen to music, or obtain discount coupons.

The Pepsi Special campaign is the first step of a larger mobile marketing strategy. Suntory is hoping to work it into an overall healthy food campaign that started on November 13 and that will run until December 1. The NFC technology element started last Friday and will continue to the end of the campaign.

Additional NFC stickers have also been included on the overhead advertising on the subways, themselves, on the hand straps that commuters hold while they stand on the trains, as well as on the displays above the windows. Door stickers are also being introduced in order to help with maximum exposure.

When that NFC technology is used, the commuter can play slot games in order to instantly win various prizes and gifts. Tokyu Agency worked alongside NFC CyberAgent for the creation, placement, planning, and overall design of this campaign. They hope that the success of this campaign will lead to a widening use of near field communications options in their mobile marketing.