A new type of wearable technology could revolutionize the way that those who are deaf and those who can hear, but who do not necessarily understand sign language, communicate. Called Sign-IO gloves, the wearable tech was invented by young Kenyan engineer and innovator, Roy Allela.

The Sign-IO gloves are capable of translating sign language into audible speech.

The glove has been designed to connect through Bluetooth to an Android phone and uses the device’s text-to-speech function to provide translated speech based on the hand gestures of the person signing.

More specifically, Allela’s wearable technology features sensors that have been placed on each finger, detecting the positioning of each finger. This includes detecting how much each finger will bend into a certain position.

Allela, a young man of 25, told The Guardian in an interview that personal experience was what inspired him to make his Sign-IO gloves. Allela explained that his young niece was born deaf and he and his family who do not know sign language frequently struggled to adequately and consistently communicate with her.

“My niece wears the gloves, pairs them with her phone or mine, then starts signing. I’m able to understand what she’s saying,” Allela shared with The Guardian.

Allela wants to place at least two of his wearable technology gloves in special needs schools in Kenya.

Allela wants his niece to have the same opportunities in all aspects of life as everyone else, from education to employment and beyond.

“The general public in Kenya doesn’t understand sign language so when she goes out, she always needs a translator,” he explains. “Picture over the long term that dependency, how much that plagues or impairs her progress in life … when it affects you personally, you see how hard people have it in life. That’s why I’ve really strived to develop this project to completion.”

The gloves were initially piloted at a special needs school in rural Migori county in south-west Kenya. The feedback he received from this test helped him to improve upon the speed at which language is converted into audio, one of the key aspects of the gloves.

Allela made sure that his tech is comfortable for everyone to use by enabling it to accommodate all degrees of sign speed – fast or slow – at which people communicate. Additionally, the app also allows users to set the language, gender and pitch of the vocalization, with accuracy results averaging 93%, according to Allela. The gloves can also be packaged in any style the user likes, to help kids sees the gloves as “cool” to fight the stigma associated with being deaf or having a speech impediment, says Allela.

To start, Allela would like to see a minimum of two pairs of his gloves in every special needs school in Kenya. He also believes that his Sign-IO gloves could be used to help the 34 million children across the globe who suffer from hearing loss. 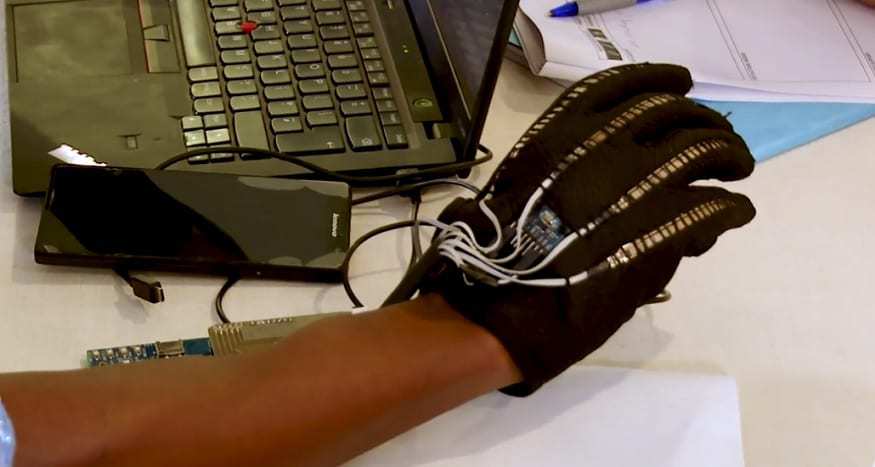