An augmented reality (AR) feature has been added to the Italian luxury brand’s iOS app.

A Gucci AR feature has been added to the brands iOS app that allows iPhone users the ability to virtually try on the company’s new line of Ace Sneakers. After trying on the shoes, consumers have the option to purchase the shoes from Gucci’s online store.

Shoppers can move around and look at the virtual shoes in real time.

Users who have downloaded the free Gucci app, simply need to call up the feature, choose a shoe style and point their iPhone at their feet. A 3D digital image of the sneakers will then be overlaid on their feet.

What makes the Gucci AR feature even more unique is that it tracks foot movements. This means that users can look at the virtual shoes on their feed in real time and from different angles, providing them with a better idea of what the shoe will actually look like on their foot in real life.

Additionally, users can take a snapshot of the virtual shoes that they can then share on social media. Also, as previously stated, they can buy the shoes they’ve tried on directly from Gucci’s online store.

The Gucci AR feature was developed with Wannaby.

This is a Belarus-based startup that specializes in retail application of augmented reality technology. Beyond Gucci, the company’s Wanna Kicks app allows mobile shoppers to view sneakers from brands like Nike, Allbirds and Adidas.

What makes the Wanna Kicks app unique is that it uses an on-device and real-time machine learning algorithm that determines the position of the shoes in space while accounting for texture, color and light variations. This tech used in combination with a fully equipped printing studio that Wannaby uses to generate 3D sneaker models, allows for foot-tracking technology that’s solid enough to adapt to various camera angles as well as follow footsteps as feet rotate and move.

“Just a few months after the technology was released, it found its way straight into the Gucci app. The recent Ace sneakers line has an incredible design, with a variety of distinctive details and textures. We’re happy that our technology allows users to have a closer look at these details and interact with models and the Gucci brand through a new experience.” 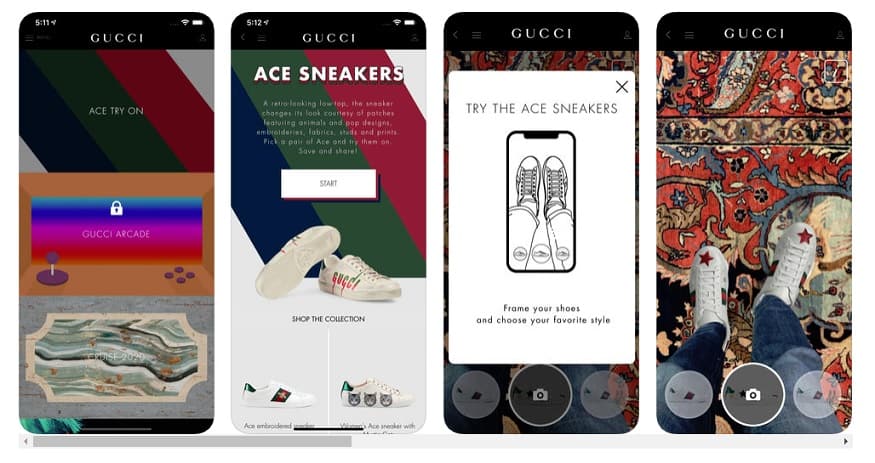 The Gucci AR feature is now available in the Gucci iOS app, which can be download for free at the AppStore.