The gadget attaches strings to the hands and fingers to provide a user with haptic feedback.

The current virtual reality systems are able to provide impressive and immersive experiences in terms of what you can see and often what is heard as well. However, there is rarely much more than that.

That said, a new device has made it possible for users to feel simulated solid objects with their fingers.

A new device makes it possible to give virtual reality systems users the ability to feel essentially anything, from walls to furniture and other objects, using their fingers. The gadget was developed with Carnegie Mellon University (CMU). It is made through the use of a number of strings that are attached to the hand and the fingers.

When the user feels that he or she is reaching out to touch a wall in the virtual experience, the device locks its strings and simulates the sensation of touching that surface. At the same time, the strings can also allow VR system users to feel as though they are touching the contours of something rounded as well. Moreover, when they touch a piece of digital furniture, they will sense resistance with their hand or fingers. In fact, it’s even possible to give a digital character a high-five and experience the sensation.

The shoulder-mounted device works with virtual reality is designed to work well while remaining inexpensive.

The device uses spring-loaded springs in order to keep the weight on the shoulders to a minimum and to make sure it will use as little battery as possible while keeping costs down.

“Elements such as walls, furniture and virtual characters are key to building immersive virtual worlds, and yet contemporary VR systems do little more than vibrate hand controllers,” said assistant professor Chris Harrison from the Human-Computer Interaction Institute (HCII) at CMU. The other researchers involved included Cathy Fang, who will graduate from CMU in a month, Matthew Dworman, an engineer at the Robotics Institute, as well as Yang Zhang, an HCII doctoral student.

According to the study authors, the users who tested the device found it provided a more realistic experience than other haptic techniques.

“I think the experience creates surprises, such as when you interact with a railing and can wrap your 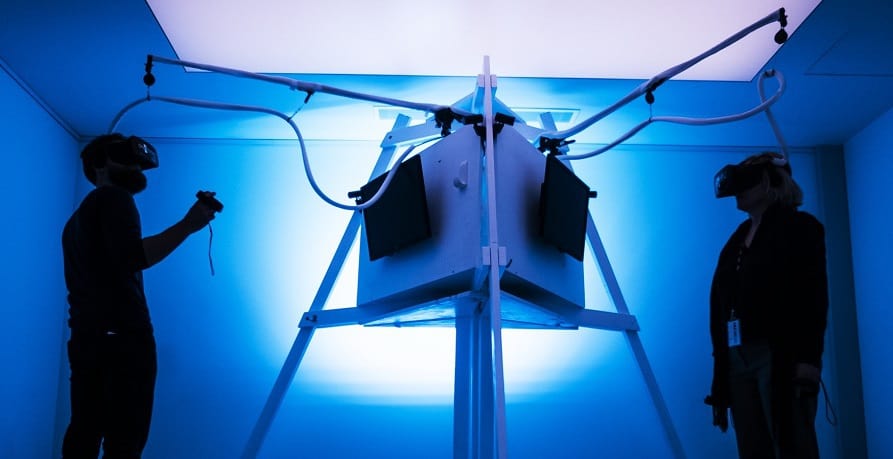 fingers around it,” said Fang about the way it works with virtual reality systems. “It’s also fun to explore the feel of irregular objects, such as a statue.”