The DarkMatter smartphone, which is called “Katim R01,” is a new mobile phone that the company has described as being the “world’s first ultra-secure smartphone.” The device was specifically designed by DarkMatter to withstand extreme field conditions and can survive being dropped, immersed in water for up to 30 minutes and run over.

The device can also withstand other extremely harsh conditions that a regular smartphone cannot.

In addition to water, among the other extremes the phone can withstand include vibrations, dust, altitude and extreme temperatures. The DarkMatter smartphone is able to survive these conditions due to it being equipped with built-in sensors, including barometer, temperature and humidity sensors.

“We combined our expertise in secure communications with everything the mobile market expects in a handset, including a great user experience,” said DarkMatter Group CEO Karim Sabbagh, reports Arabian Business.

“Then we challenged the brightest minds in the industry to create a rugged design to withstand extreme field conditions experienced by defence, emergency services and the construction, mining, transport, energy, oil and gas industries,” Sabbagh added.

The DarkMatter Smartphone’s “rugged” design makes it ideal for use in harsh conditions.

The Katim R01 was designed by DarkMatter engineers in the UAE, Finland and Canada. The device has five layers of hardened case to meet military standards. This makes it strong enough to be dropped, run over and immersed in water for up to 30 minutes without damage, while its previously mentioned integrated sensors allow it to withstand dust, vibrations, extreme temperatures and altitude. All these capabilities make the mobile phone ideal for those who work in extreme field conditions.

What’s more, the Katim can reportedly deliver SOS messages with GPS coordinates via a dedicated buttons and touch screen that maintains its accuracy, even when used with gloved or wet hands.

The smartphone also features high mobile security and can detect intrusions using active physical and real-time monitoring that will trigger the device to erase the user’s information to prevent data theft. Additionally, the phone has a “shield mode,” which securely cuts off cameras and microphones while it remains powered and online.

“Katim R01 delivers unbreakable security and the same great user experience, no matter where you are. In a world that never stops, it’s tough, it’s rugged and it’s ready for anything,” Sabbagh said. 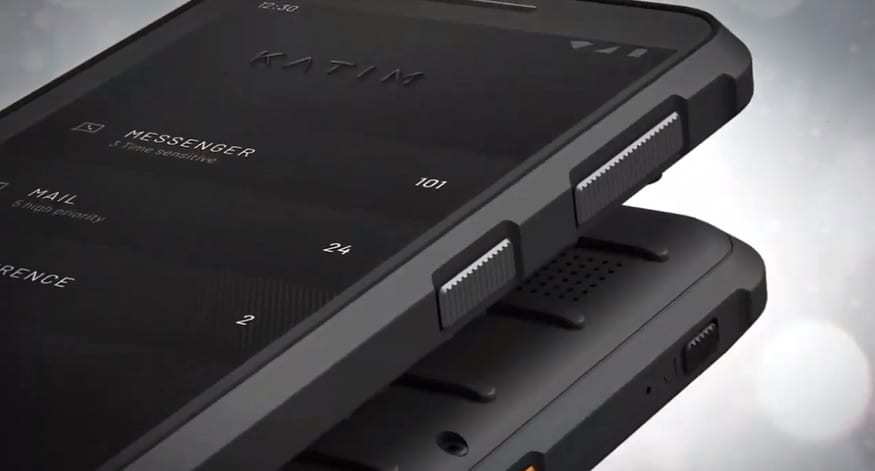 Those interested in purchasing this DarkMatter smartphone can only do so directly from DarkMatter Group, and the cost of the device is price on request from the company.