The gadget has been designed to be used during live streaming conferences and other types of events.

Among the first headlines to make some real noise from the Consumer Electronics Show (CES) in Las Vegas was the MOVI camera, which is meant to be used for live streaming of all sorts of events, conferences, weddings and other videos to be viewed live all around the world.

The streaming camera is to become available to consumers in April and will retail for an expected $199.

The MOVI camera can be used as a regular handheld streaming video device, but it is also designed to be placed virtually anywhere to capture the moment regardless of whether or not anyone is available to hold it. It features a very wide-angle 15-degree 4K lens. This makes it possible to grab that wide shot but it can also be cropped down to narrower or close-up shots, depending on what the user is trying to achieve with the video stream.

Users are able to control the streaming MOVI camera through a smartphone app from Livestream. 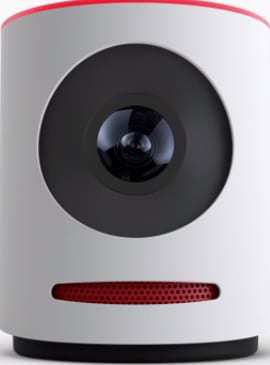 In this way, it is “the pocket-sized live event camera that lets you edit while you film,” according to Livestream’s founder, Mat Hoat. At the CES, he said that this offers a number of considerable improvements over trying to stream using your smartphone. He pointed out that “With your phone, you have a limit of how long you can hold it and you have a limited battery life,” adding that “If someone calls you, the livestream is interrupted.”

The camera uses micro-SD cards as its memory, allowing the live streams and recordings to run quite long and to be stored if the user wants to keep them.

This type of service is hardly new to Livestream, but it is new among its offerings to the consumer market. Livestream has already provided live streaming service to massive corporations such as Disney, and those well known for technology, such as Tesla. There are about 50 million people that watch events run through this company each month. Now, similar opportunities will be opened up to the regular consumer with the MOVI camera.